FORT KNOX Ky.- Today, the 1st Regiment Advanced Camp Cadets trained vigorously in preparation for their weapons qualification. The purpose of their training is to learn how to get a tight shot group, which demonstrates proper firing. The technique for that includes proper positioning of the rifle, sighting, breathing, and trigger squeeze. It’s important the Cadets learn how to move their sights so that their shot group is at the center of the target, which ultimately gives them a better zero.

Weapons qualifications can be an intense part of Cadet Summer Training simply because it is a make or break requirement for them to graduate. Despite the pressure to succeed, the Cadets were comfortable with this exercise due to the training they were provided. 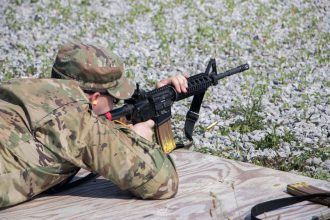 “We had some pretty good trainers from Army Marksmanship Unit. They showed us a few things like different positions, how to take apart your weapon, and how to make adjustments based on where the shots are going. So that training really helped; I was able to take the what I learned into consideration, aim correctly, and hit the target pretty well”, stated Cadet Connor McDaniel of the University of Georgia.

McDaniel continued, “when we arrived, we did a safety brief, where they basically tell us the rules of marksmanship to prevent people from being injured. Then they walked us through the process of loading a magazine, getting in the firing position, and laying down and pulling the trigger when you’re ready.”

Although the Cadets were given a sufficient amount of training before firing their weapons, executing those learned tactics wasn’t exactly a walk in the park. 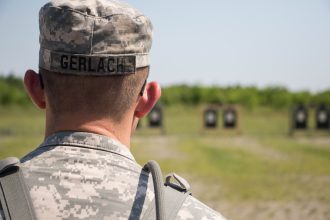 There are several challenges that the Cadets were faced with while learning to properly use their rifle. Cadet Phedlia Poakye of Pittsburg State University shared a few of those challenges. “My biggest challenge is zeroing, I tried it once and didn’t pass so I have to do it again. Another challenge is working with my sights. Which means making sure I have a pinpoint on the target, and that I’m focused and not moving. I haven’t been to a range in over a year so this is challenging but I’ll get a grasp of it with time.”

Cadet Maria Gardner of University of Notre Dame expressed a few of her challenges as well. “The most challenging part for me is being consistent throughout the whole day, because it is such a long day. Consistency is very important in order to be successful.”

Through the heat of the day, the Cadets maintained a positive attitude about the exercise. Cadet Poakye left her fellow Cadets with a few words of encouragement to take into consideration.  “When you’re out here have fun. If you don’t zero the first time, don’t be discouraged because you’ll have more opportunities to get it.”

Cadets zip down the line to leadership