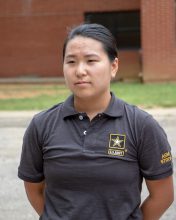 FORT KNOX, Ky.—Two hundred ninety Cadets arrived at Fort Knox on June 10 with a mix of enthusiasm and nervousness radiating from the group.

After getting off the bus, the group moved to a nearby overhang to ground their gear and prepare for inspection. All items lay on the gravel to be combed through by Cadre.

Cadet Stephanie Martino from the University of Kentucky shared her feelings during arrival. Martino joined ROTC upon completion of her bachelor’s degree and is continuing into a Master’s program.

“It was kind of an adrenaline rush, which that’s something I’ve missed for a while,” Martino disclosed. “I used to be a softball player at UK.”

2nd Regiment, Basic Camp Cadet Stephanie Marino, from the University of Kentucky, removes her items for inspection at Fort Knox on June 10, 2018.

Contraband, such as containers under pressure, knives, alcohol-based mouthwash, and especially GPS enabled watches, where either thrown away, or safely stored for return to Cadets upon completion of Basic Camp. These items could potentially hurt Cadets or broadcast their movements on post.

“I’ve heard [Basic Camp] was a lot of fun,” Decker said. “It’s hard, but everything in the Army is supposed to be hard.”

All Cadets met Chaplin Clark and shared their religious preference. They were issued bed linens and put their stuff in their rooms. 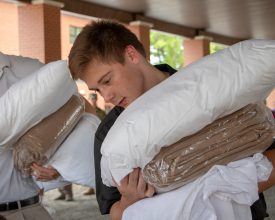 Cadet Austen Dombrowski from DePauw University summed up his feelings in one word, which were echoed by the whole group.