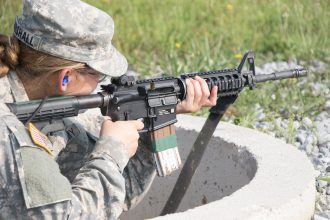 Fort Knox, Ky.- 1st Reg., Advanced Camp was at the George Blair range shooting pop-up targets. As a mandatory event, Cadets must pass their weapons qualifications in order to graduate.

Instead of a stationary paper target, the pop-up range has targets that do exactly that: pop-up. Targets are between 50-to-300 meters away and Cadets must be able to maneuver their weapons into good firing positions.

Cadet Megan Zurliene from the University of Illinois and Urbana Champaign expressed her relief at being done with weapons qualification and credits her prior weapons experience to how she did today.

“Having concentration and being able to go through steady position and breathing and hit down all the targets is the hardest part,” said Zurliene. “I did decent, it wasn’t my best time shooting in the past but I did good enough.”

Cadets are given specific amounts of ammunition and have different positions in which they must hold their weapons. Positions include prone supported (ground supported), prone unsupported (using elbows for support), and kneeling. 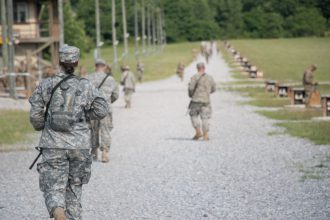 1st Reg., Advanced Camp Cadets finishing up the pop-up course and heading back in to return their equipment. June 11. Fort Knox, Ky. Photo by AJ Barnes.

Though Zurliene may be finished with the course, plenty of Cadets were still waiting for their turn at weapons qualification. Cadet Nate Thomas from the University of Portland was ready for the pop-up course and stressed on the importance of marksmanship.

“This is one of the basic tasks everyone should be able to do,” stated Thomas. “It’s expected of everyone. All the instruction we’ve received has improved my score a lot, it went up by like 15 points.”

Thomas was confident in his abilities to qualify as he has experienced both a pop-up and paper range before. When asked if he was going for a Recondo Badge – an award given to certain qualifying Cadets at the end of training – he replied, “we’ll see.” 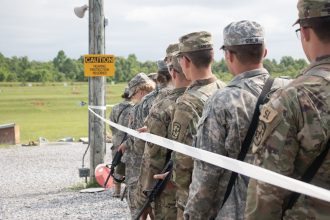 Marksmanship can be a tedious task for those with little weapons experience, but with determination, focus and maybe some luck, Advanced Camp Cadets should pass and move onto the next challenge. Maybe they’ll even earn a Recondo Badge along the way.