FORT KNOX, Ky. – Map and compass in hand, Cadets from 1st Regiment, Advanced Camp squelched through the soggy ground as they set off during a land navigation practical exercise this morning.

The Cadets were tasked with finding two points at Training Area 14, the land navigation site, to prepare for the official land navigation course later today and tonight.

Capt. Elliott Emerich, a CST Platoon Trainer, explained that Cadets are tested on their ability to physically navigate and locate points on the course and evaluated with respect to their thought process in attacking and locating those points. 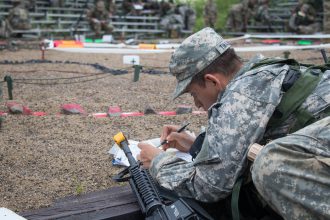 Cadet Joseph Davis, a student at Black Hills State University from Woonsocket, South Dakota, asserted that some of the hardest decisions are made while trying to find the easiest possible route.

“Route planning […] can really make or break a mission,” said Davis. “You can really wear out your troops if you plan to just dead reckon or just straight line it.”

Davis mentioned that his calculated azimuth, or direction, went straight through a large swampy area, which he opted to walk around.

Emerich expressed that the foundation of land navigation is knowing where you are at all times during the process of point plotting, route planning, and associating terrain. He stressed the importance of accurately plotting points before going out to find them.

Cadet Amanda Rempert, a student at Loyola University Chicago from Batavia, IL, had initially planned to use trails to track her position and find her points but had to adapt when she couldn’t find the trails that were on the map.

“I went back to the checkpoint and shot the azimuth and dead reckoned through the grass,” said Rempert, adding that she didn’t go for the second point due to time constraints. 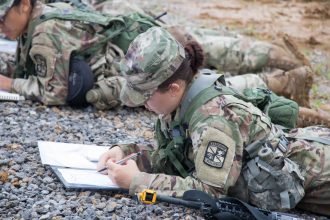 Though she only found one of the two points, Rempert stated that she now feels more confident about her land navigation abilities.

“It gave me some reassurance knowing that I did it by myself and found the point correctly,” noted Rempert.

To pass the official land navigation course, Cadets must find at least three of four points during the day portion and one of two points at night.

Cadets must find comfort in the uncomfortable