FORT KNOX, Ky. — Cadets from First Regiment Advanced Camp continued preparation for the Squad Battle Drill by planning, as a squad, the tactics that they will be implementing for the drill.

Staff Sgt. Richard Baxter with the University of Maryland explained that during the Squad Battle Drill Cadets would be conducting an ambush on a point target, which will later lead to an ambush on an area target.

Baxter described just what the Cadets’ mission is for this drill,  “The purpose of it is to surprise the enemy, basically, and to destroy the enemy.”

The Cadets, gathered around a makeshift map on the gravel, intently listened making sure every person understood the plan of action for when they undergo the actual drill.

Cadet Margo Houston from Mobile, Ala., currently attending the University of South Alabama, excitedly stated, “After three years of military science, [Advanced Camp] is the final chance to really push yourself and prove that you want to be an officer.”

She is looking forward to gaining confidence in how to react in situations that she isn’t used to.

Landon Carter from Utah State University explains why he thinks this drill is important, “I’m learning to develop confidence here on the squad level, you know, less people to control and command.”

He also said, “It’s a good starting point to deal with people that you’ve never really been with until now.” 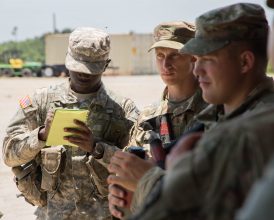 Baxter explained that when the Cadets go into this drill, they will be facing many obstacles including sleep deprivation, the heat, and fatigue

Houston said that she thinks the Cadre are looking for Cadets to be calm under stress, and the ability to make decisions on the spot.

Carter believes that the Cadre are looking for the leadership ability of patience and execution.

Ultimately, Baxter says that they just want to see the Cadets showcasing their leadership qualities, ability to make decisions, and ability to fight against the fatigue they will be feeling during this drill.