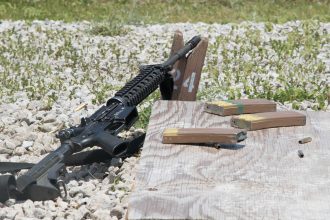 Cadets are given a set amount of ammunition and shoot down the 25-meter range at silhouettes of various sizes on a paper target to simulate distances up to 300 meters. To qualify, Cadets must hit 26-out-of-40 shots; expert marksmen who make more than 36 shots have a shot at the Recondo Badge- an award bestowed upon select qualifying Cadets at the end of Advanced Camp.

One Cadet, Pan Phyu from Pittsburgh State University was one shot short of qualifying for Recondo, and had the highest score from her group. She credits her shooting ability to her interest in weapons. 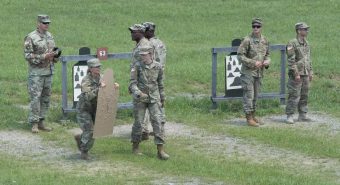 Cadre and Cadets inspect their targets and find out who qualified at the ALT-C weapons qualifications course. June 15. Fort Knox, Ky. Photo by AJ Barnes.

“I have experience with National Guard and we do training but we barely shoot, maybe once a year,” said Phyu. “I just like the M4 and I study about it and the training we received yesterday in the field was really helpful.”

While the rest of the regiment rolls through the range in the heat of the afternoon, the Cadets must remember to have patience and maintain their position and breathing to qualify.

“My big issue is that people squeeze (the trigger) really fast and they don’t control their breathing,” said Phyu. “That really throws most of the people off.”

The ALT-C course is a major challenge for Cadets with little weapons experience but for individuals that qualify, it brings them one step closer to graduating Advanced Camp.

“Is It Ever As Scary As It Looks?”