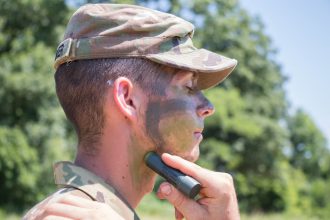 Cadets from 1st Regiment, Advanced Camp, participated in Pre-Combat Inspections before heading out to the field on June 16 at Fort Knox, Ky. (Photo by Emily Peacock)

Standing by their rucks in the low grass at Assembly Area Baker, the Cadets checked their gear, hydrated, and helped each other apply camo face paint.

Cpt. Andres Bautista, an Observer-Controller-Trainer, explained the purpose of the PCI is to prepare for deployment, which in this case is to the country of Atropia.

Bautista asserted the PCI is essential for troop preparedness to fight the enemy. 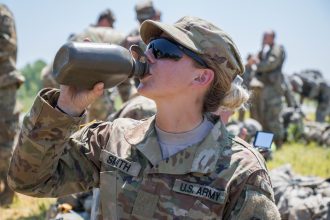 Cadet Haley Peterson, a student at the University of Nevada, Reno, described making sure one’s weapon is clean, the radios are working, and one has hygiene items to stay healthy in the field as a few components of the PCI.

“You’re basically tracking to make sure that you have all the equipment that you need to be successful during a mission,” articulated Peterson.

Cadet Douglas Cooper, a student at Loyola University Chicago, said as Platoon Sergeant his role is to ensure accountability of his squad leaders for their own squad members.

Cadets from 1st Regiment, Advanced Camp, participated in Pre-Combat Inspections before heading out to the field on June 16 at Fort Knox, Ky. (Photo by Emily Peacock)

“It’s my job to make sure the squad leaders are up so then the platoon’s up,” stated Cooper.

Cooper added at CST the PCI is employed prior to any training event to make sure all gear and equipment is good to go.

Cadet Giorgi Chilingarashvili, a student at the University of Connecticut, emphasized the importance of squad and team leaders checking on their troops.