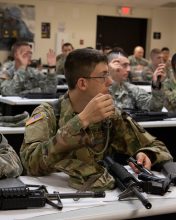 “For some of them, this is the first time that they have touched a weapon,” 1st Lt. Chaplin Maritza Curet explained.

“It can be a little tricky,” Cadet Chloe Cline from Louisiana State University said. “There are a lot of little pieces; it can be frustrating.”

As with all exercises, the trainers watched their Cadets closely trying to spot signs of leadership. 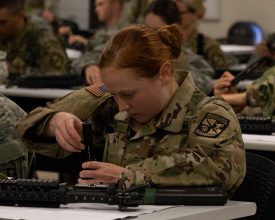 “A lot of people think that yelling is being a leader. It’s not,” Cline said. “They are looking for people who are taking care of others around them and willing to help out.”

After instruction, and the room had become silent, Drill Sgt. Vinson Ford from Lynchburg, Virginia announced that the Cadets would have two minutes for full disassembly, assembly, and functions check.

“It’s not a race,” Ford said. “ It’s about being efficient. You should be able to do this in the dark.” Then, the clacking continued as weapons became parts then weapons again. 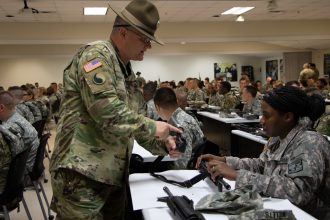 Cadets heading to Basic Camp, and those already here, have much to look forward to. Thoroughly listening to instructions and following through are critical for success here.