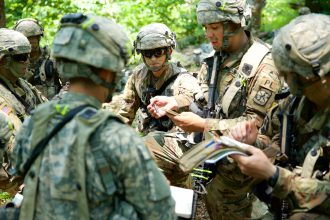 Cadet Platoon Leader of Charlie Company, 1st Regiment, Advanced Camp, Daniel Hall, from Delta Pennsylvania, out of Salisbury University, Maryland, conducts a leaders’ meeting prior to rolling out to the Objective Rally Point at Forward Operating Base Wolverine June 17 in Fort Knox. By Joseph Barkoff.

“Right now we are in the crawl phase, where our lanes are Cadre led,” said Cadet Patrick Patterson from Augusta University. “We learned a little about the terrain and some things that will benefit us when we start doing this on our own.”

After preparing and planning their mission, Cadets move out from their patrol base and set up an Objective Rally Point. At their ORP, the majority of the platoon pulled security, while others prepared for the leader’s recon.

“Right now everyone is a little salty right now with the heat and difficulty of the missions, but we’re keeping our heads up.” Said Cadet David Kretzer from West Virginia University, “Leadership is really reflective, because we have the same struggles and we have the same experience learning from each other.” 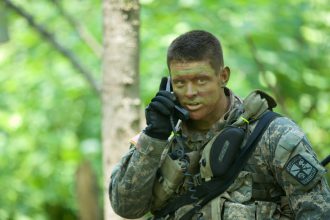 The individuals on the recon team were counted out of the ORP for accountability and left a five-point contingency plan. This plan, called a GOTWA, includes where the leaders are going (G), others they are taking (O), time of return (T), what to do if they do not return (W), and actions to take if moved upon by the enemy (A).

The recon element came as close as 20 meters to the opposition forces (OP4). They observed that their objective was fortified with razor wire and continued to observe OP4 take a defensive posture.

The Cadets also face the challenge of combatting the elements when on mission. The heat and humidity of their training areas pose a unique leadership challenge. “We’ve experienced some Cadets who are showing signs of heat exhaustion, and we are taking necessary precautions to cool them off and monitor them, making sure they’re being safe,” said Lt. Col. Paul Painter from Marshall University. “Some of the Cadets aren’t as conditioned to this kind of work and weather as they need to be.” Some come from universities without as much humidity, while others haven’t trained enough marching with rucks.

During the recon, the Cadets actually failed to meet the timetable set by their GOTWA, they also had a failure in communication between the recon element and their ORP. These mistakes were valuable learning opportunities for them. The lessons they take away will help them succeed when they are evaluated in the coming days.