FORT KNOX, Ky.— When people would usually be winding down for the night, the Cadets from 1stRegiment, Basic Camp were busy preparing for Night Land Navigation.

Land navigation tests the Cadets’ skills of using their map, compass and protractor. By keeping a pace count the Cadets will be able to find checkpoints. 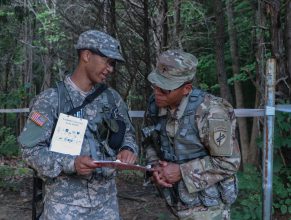 Excitement ran through some Cadets as the beginning of the mission was drawing closer. Cadet Matthew Manns from Phoenix City, Ala. is attending Newberry College.

He said, “This is my first time being on a new course, so I’m pretty excited to jump into it.”

Master Sgt. Duffy, Senior Military Instructor at the University of Pittsburg stated, “They have three hours to find two out of three points. Their goal is to find three, though, because they’re high-speed, motivated, and dedicated.”

Cadet Isaac McIntire from Grantham, N.H., studying at the University of Southern Maine explained, “The Cadre have helped with training, and they allowed us to get a couple of hours of sleep before. A lot of the training and practices we’ve done before are going to help us with the nighttime operation.” 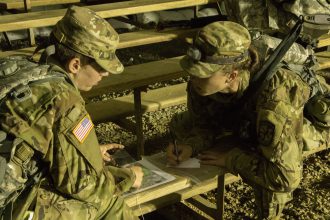 The Cadets had to face many safety concerns during their time on the terrain, mainly from the environment. The Cadets received a safety briefing about ticks, snakes and spiders that are found in the Fort Knox area.

Another environmental concern was the presence of sinkholes. In the briefing, one of the Cadre humorously warned, “If you see a circle of red lights, it’s not a spaceship, it’s a danger area.”

Each of the danger areas was marked off with red lights so each could be easily seen. The Cadets were given the coordinates of every sinkhole danger area so they would be safe during their mission.

McIntire said, “The terrain is a challenge. Navigating through the woods would be a challenge. Doing all of that in the daylight would be challenging enough, but we do it without any visual help.” 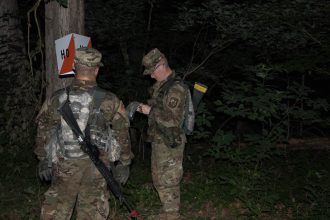