FORT KNOX, Ky. – Second Regiment Basic Camp Cadets climbed to the challenge during their High Ropes Course in Fort Knox June 19, empowering Cadets with the courage and confidence it takes to perform in the field.

High Ropes consists of a collection of three height related tasks challenging Cadets to trust in their equipment and teammates.

Whether Cadets are relying on emotional support from their safety, or trusting their belay to ensure they do not fall from the top of the 50-foot climbing tower, the High Ropes Course is testing courage and confidence on all fronts.

During these challenges teammates, or battle buddies, act as a key support system. Cadet Stephanie Martino, University of Kentucky, says she wants a battle buddy who is always going to be by her side even when she falls down.

“You might be 40 feet in the air, trying to get your foot over a log, and you need that person behind you to say you can do it,” she said. “You may not always believe in yourself, you might need someone to believe in you before you can get the job done.”

Lt. Colonel Jessica Murnock, Professor of Military Science at the University of Louisville, elaborated on the skills of a battle buddy further.

“[Battle buddies] that genuinely care that the person is okay and is invested in their ability to make it though,” Murnock explained. “They are engaged with that person all through out the day and is checking with them. At some point what we are trying to get at is the battle buddy is more concerned with their battle buddy’s welfare than they are their own.”

Most Cadets in Basic Camp, Second Regiment, have only known each other for nine days. Andrew Cho, Temple University, and Kavon Wade, University of Pittsburgh, are like most other Cadets. They have worked together no more than 9 days and come from different place, but trusted each other as battle buddies.

During the early part of the day Cho took the challenge of the High Ropes course first. Speeding through the first half of the course with little guidance from Wade.

However, during one of the tasks, Cho’s stress peaked and he needed more than Wade’s passive support.

“He just gave me that look,” Wade said. “When he gave me that look I just felt that I needed to help him. I just gave him all the knowledge I knew. Once I did that he started calming down a little, he stopped shaking a little and he was able to complete the course. We don’t believe in quitting, the fact that he finished the course is all that matters.”

Cho, following Wade’s advice, successfully completed the difficult rope switch. Where he had to support himself using one rope and then carefully turn around and support himself on another.

“My battle buddy really helped me out,” Cho said gratefully. “He gave me advice, to just look at him, and show me what to do and I was able to execute.” 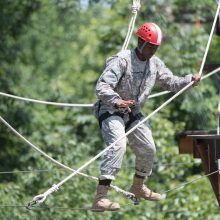 The idea of a battle buddy is a concept introduced early in an Army career and carried throughout a person’s time in the service. Sgt. Ciu Leatoa, Fort Hood, is a Medic and High Ropes Course instructor.

“A battle buddy is a companion, your friend, a system of support, someone who is there whether you need them or not,” Leatoa said.

Leatoa broke his hand during combative training, hand-to-hand combat, and shortly after broke his index finger on the same hand during recreation. He recalled the importance of having his battle buddy around.

“[My battle buddy] helped me with everything he could while in the field and finally convinced me to go to sick hall in the end,” he said. “He helped me with health and keeping my job, essentially.”

Leatoa advised cadets to develop those bonds and trust their battle buddies.

“When you are going through these obstacles that are six, seven, thirteen times taller than you are. You find out that you are a lot more afraid of heights than you expect, and the only thing you have left is trust in equipment you have never seen or trust in people you are going to see daily.”