FORT KNOX Ky.- Call for Fire is an exercise that the Cadets are tested on and must pass the Call for Fire exercise in order to complete their summer training. The day prior to testing day, Cadets are briefed for an hour and a half on the transmissions and other details. They then have a two-hour class, followed by three hours of practical exercise. Once all of that is completed, they are ready to be tested.

What exactly is Call for Fire? 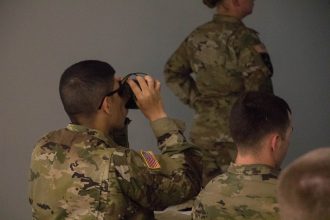 According to Cadet Preston Jones of Virginia Tech, Call for Fire is, “…spotting an enemy, whether it be a vehicle or dismounted enemy somewhere. We have to spot the enemy location based upon where we are located. We then use that information to call in Call for Fire to destroy that target.”

Cadets Rejina Calo and Danielle Gove were able to give a visual of what the classroom learning looked like. They stated, “in the classroom, we were looking at a simulator of a map projected on a screen. You are given an observation post, or a target, that you want to hit. “ 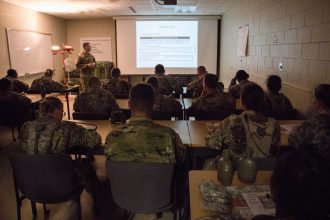 “You’ll then have to plot that target. Once that is completed, they’ll send out rounds of fire. You then have to plot those points and adjust them accordingly to hit the direct location you gave. We learned bracketing, which is just figuring out how many meters you want to adjust your pinpoint location to make a more accurate shot,” they continued.

What are the six methods used for a standard call for fire?

“We don’t usually focus on the last two with the Cadets, it’s not necessary for them to learn today. However, they are included in the first three transmissions when you call for fire. So, the first transmission they go over would be the observer identification, the second would be the warning order, and the third is the target location,” continued Broderick.

If any advice could be given to Cadets who are going to learn call for fire, Cadet Jones was happy to help.

“Pay attention to detail. Also relax, you are going to be adequately trained for this exercise. All of the Cadre here are rooting for you and want to see you succeed so just pay attention in class and ask questions when necessary. You got it.”

Cadets Pop Out to Qualification Range