FORT KNOX Ky.- How does the military make soldiers who are prepared for anything? The answer is simple, though the methods are not. Greatness is not acquired overnight. It requires preparation, training, and dedication.

Here, at Fort Knox Kentucky, Cadre are dedicated to strengthening, guiding, and training every Cadet to be the best representation of a soldier. 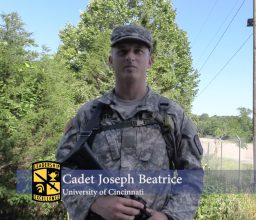 What is weapon qualifications? Cadet Joseph Beatrice of the University of Cincinnati gave us some insight, “today we are qualifying on 300-meter range with the M481 weapon system. It’s a pop-range, so you go through three different iterations from three different firing positions– prone supported, prone unsupported, and kneeling. You fire at targets when they pop-up and watch them fall once you hit them.”

This training sounds quite similar to the training they were given at the Alt-C range so why train at the pop-up range as well?

Beatrice was happy to provide that answer as well. He continued, “The difference between the Alt-C and the pop-up range is the Alt-C is for qualification where the paper target is 25meters from you. The silhouettes of the targets are the same you would see on the 300meter range, except that they are scaled so they look the same way on the 300-meter range.” 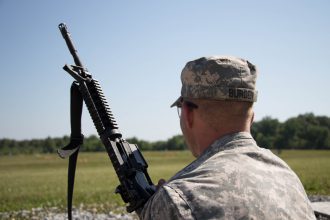 When asked why this training is particularly important for a solider to pass qualifications, Beatrice responded with, “This is important for our training because it’s an annual requirement for every soldier has to qualify, regardless of your MOS or job.

He added, “though practically, it’s because we are the army and we exist to fight our nation’s wars. If foreign policy were to ever fail, that’s when we come in and sometimes you’re going to have to know how to shoot the enemy, to put it bluntly.”

There you have it! These Cadets are preparing for greatness. Every detail of their summer training is part of the process that makes them great.

Returning the life in a rucksack

Don’t Freeze in the Jungle