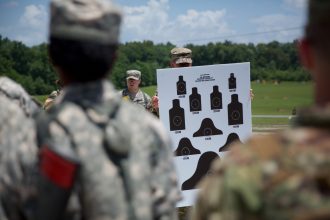 Cadets of 1st Regiment, Basic Camp receive a final briefing for familiarization on the Alternate Course Qualification range at the Morgan-Pells Range June 19 in Fort Knox. By Joseph Barkoff.

The ALT-C qualification is the Army’s 25-meter Alternate Course for rifle qualification. The Cadets are required to shoot at targets containing 10 silhouettes, scaled to represent distances ranging from 50 to 300 meters. They are timed on 3 strings of fire; one for each firing position kneeling, prone supported, and prone unsupported positions.

“A lot of the Cadets felt pressured by the time limit, but I would advise them to not rush,” said Cadet James Iaia from Penn State Abington University (host school Widener University). “You have about 6 seconds per shot, and that really is doable when you just breathe and focus.” 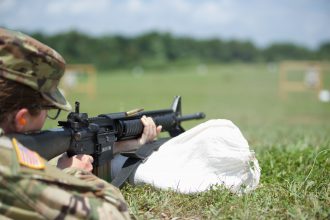 When learning their basic rifle marksmanship doctrine prior to qualifying, the Cadets learned how to position themselves and the rifle for the optimum consistency and accuracy. The Cadets were instructed per the updated Training Circular 3-22.9, that includes changes such as new cheek weld distances. Cheek weld is the position of the shooters cheek on the rifles stock. The placement is now approximately four inches away from the charging handle, rather than directly on the charging handle. This update to the field manual allows for an optimized sight picture, maximized sight radius, which contributes to more accurate fire. It also included updated stances that fine tune the standing, kneeling, and prone positions.

“The biggest takeaway for us today would probably be that you need to have patience and make sure your rifle is zeroed right before you try to qualify,” Said John Tartline, from Methodist University (host school Campbell University). “A lot of people tried to rush it and didn’t do as well as they hoped.”

The most notable change in TC 3-22.9 that has raised eyebrows is the allowance of resting the magazine on the ground in the prone unsupported position. In the past soldiers were forced into a more uncomfortable position in fear of a malfunction, but it has been proven that this practice will not create a misfeed. 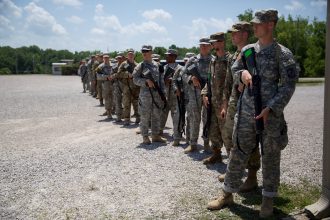 Cadets of 1st Regiment, Basic Camp wait to receive their ammo and targets for familiarization on the Alternate Course Qualification range after zeroing their weapons at the Morgan-Pells Range June 19 in Fort Knox. By Joseph Barkoff.

Cadet George Favetta from College of New Jersey (host school Princeton University) said, “This is my first Army experience outside of Princeton, and it’s been really enjoyable getting out shooting and to meet Cadets from all over the nation.”

“I would say range time is a rare treat. As Cadets, most of our time is taken up by classes, physical fitness, and personal development. The Army isn’t like call of duty, you’re not always behind a rifle,” said Iaia.