FORT KNOX, Ky.— With only one week left of Basic Camp for the Cadets of 1st Regiment, the obstacle course provided further team-building and self-confidence.

Cadet Gabrielle Johnson from Miami, Fla., studying at the University of Central Florida, said, “Some courses were hard for certain people, but with the motivation from others, our peers, it helped us push through.”

Johnson recalled the ruck march that the Cadets did earlier in the morning and how she found the strength to push through after falling behind because of the support from the other Cadets. In the same way, she tries to lift the other Cadets up. 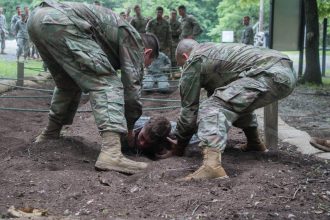 She said, “We have each others backs and make sure no one falls behind. Over these past three weeks we’ve built a family, so to say.”

“I was really nervous for some of the obstacles and I ended up just forcing myself to do some of them,” explained Cadet Joshua Bennett from Erie, Pa., studying at Edinboro University. Bennett wanted to push himself to try his hardest through every challenge.

Bennett pushed himself through the nerves, and ultimately, he said, “You feel good at the end of it because you made yourself do it even though you didn’t want to.”

He expressed that he believes confidence helps push Cadets towards success during Basic Camp. His word of advice for future Cadets is to “just have confidence and believe in yourself.”

Sgt. 1stClass Katie Jones believes that both confidence and comradery are very important for Cadets to learn. She explained, “They have to learn to depend on people they’ve never met before. They come from all different backgrounds, all different schools, and this is their chance to bond and know how to work as a group.” 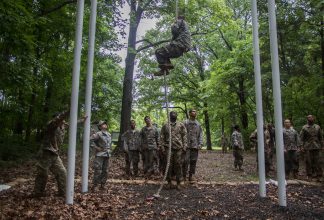 Many times, confidence can be formed in teams. Jones said, “A lot of them have never done military anything before so when they’re struggling, if they’re not a team it’s going to be more difficult to get through this.”

Johnson said, “The word ‘can’t’ should not be in your vocabulary, so actually putting [Cadets] in the position to do the things that they think they would never be able to do just makes them have better hopes for the future and a more positive mentality.”

Jones explained that what the Cadets are learning now, even the confidence and comradery, will be building blocks for Advanced Camp and beyond.