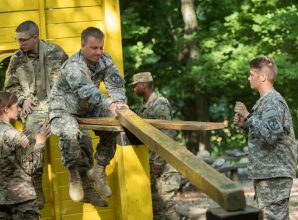 The course consists of 6 yellow and black obstacles designed to challenge the groups critical thinking skills while allowing Cadets to experience the importance of following through with a designated role, leader or follower.

These obstacles are meant to simulate realistic events and assignments the future lieutenants and soldiers could experience in the field.

Simulations include traversing destroyed bridges, scaling walls surrounded by dangerous grounds and climbing across a gorge with a casualty.

Alexandrea Guatreaux, a second lieutenant, who was leading the lanes says the course should encourage teamwork and building a cohesive group during the early stages of basic camp.

“Finding each others’ strengths and weaknesses and trying to work together,” she said. “You can’t do any of this without one another.”

The events have no single answer for accomplishing the mission, with most lanes providingmore tools than needed. 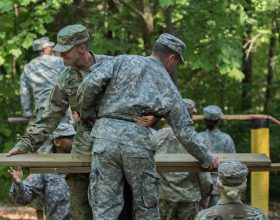 Event 6, The One Rope Bridge, is a scenario where the Cadets are trying to help a casualty to a safe location for medical evacuation. Provided with all the tools necessary to complete the task and a team with varying levels of experience with those tools can create issues.

Two groups of Cadets tackled the scenario differently. One group with previous knowledge of working with a pulley was able to use all of the tools at their disposal. Having one Cadet reach the safe zone before unfortunately losing two teammates and leaving the causality suspended in the middle of the gorge.

The following group had no knowledge of the pulley device but used different knots and the commando crawl to cross the gap safely. This group was able to have five Cadets in the safely zone and the casualty attached to the wire, before running out of time. The Cadets did not get the casualty to safety. 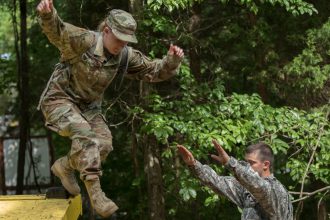 Master Sgt. Kyle Beyer, Eastern Michigan University, says while there may be a preferred way to accomplish each mission, what is important is that they accomplish the mission as a unit.

“What they need to get out of it is the ability to accomplish a mission together,” Beyer explained.

During the challenges Cadets can suffer penalties such as losing their battle buddies, losing vital equipment required to complete the mission or time penalties. Penalties are the result of touching off-limit objects or dropping gear or people into ‘dead space’, areas representing landmines, high water or lava.

Cadre often emphasis the importance and seriousness of losing gear and teammates and want Cadets to recognize the real world consequences if it happened outside of the training zone. 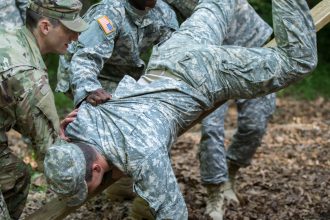 When in a leadership role Cadets should ensure that they have a clear, complete plan with an order to move in and designating roles for battle buddies to fall into.

“When in charge, be in change,” said Sgt. 1stClass John Spencer. “Come up with a plan and drown out all the other Cadets that are going to be talking. Making sure everyone knows the plan, while staying in charge.”

No matter the role the Cadets take on during the exercise they will walk away with a new appreciation for their team and a new understanding of being a leader.

“In order to be a leader you have to first be a follower,” said Samuel Lopez, Texas A&M, “You have to learn to follow and understand your mission and your leadership.”