FORT KNOX, Ky. — Today’s game of high-tech laser tag brought all the bark of a battle to 1st Regiment Advanced Camp, but none of the bite. Several scenarios ran at the same time during the field training exercises, but this one involved an illegal checkpoint. The Cadets’ goal was to raid it. 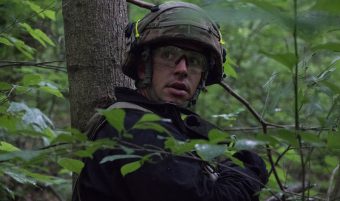 An active-duty Army unit came out this summer to support CST by acting in these exercises.

“These guys are meant to be bad guys who are stopping vehicles and maybe stealing stuff,” Lt. Col. Dennis Faulkner, Professor of Military Science at Indiana University, said.

Cadets and Cadre used rifles outfitted with lasers. Vests registered those laser shots, then informed the wearer if they were “injured” or “dead.” These devices are an objective answer to the confusion found in battle, whether real or fake. 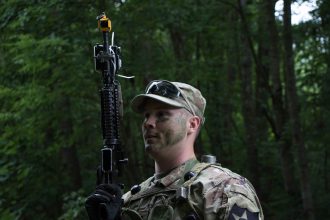 Cadet holds up his rifle outfitted with MILES2000 equipment. (Photo by Angela Yin)

These devices simulate actual weapons and provide a way to assess weapons effects during force-on-force training, according to the Federation of American Scientists’ Military Analysis Network.

An impressive amount of shots echoed through the shady forest. To an outsider with no knowledge of Army strategy or jargon laden  commands, the plan was a mystery. Yet, even those in the know faced problems. Leaders designed these scenarios to draw out breakdowns in communication and strategic errors. Simulations place Cadets’ thought processes on trial without actual consequence. 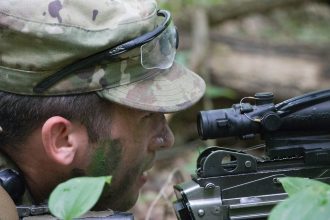 Cadet zeros in on a target. (Photo by Angela Yin)

And, that was the main skill tested today, not how well Advanced Camp Cadets can aim a rifle. Leaders are watching for how well they can communicate and follow through with plans. Good aim is still a feature of the scenario, but not the highlight.

When the dust had settled, Cadets had neutralized all opposing forces. Then, back at camp, they analyzed what happened, what worked, and what didn’t.