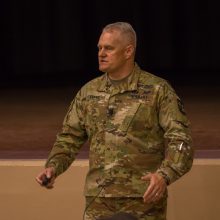 The Basic Camp Cadets started their evening filing into Olive Theater, a large beige auditorium. Once Evans arrived the Cadets stood at attention and then shouted their regiment motto ‘All or nothing’ before returning to a rested position in their seats. Both Alpha and Bravo companies have separate mottos, but this regimental motto was chosen minutes before Evan’s arrival.

The Cadets remained in silence, their respect for Evans leaving them immobile.

Evans later provided the Cadets key rules for them to remember both while at camp and while they continue their journey toward a career as military officers.

“I have three really basic rules,” he said. “You probably won’t have to write them down, you probably will remember them.”

Shuffling sounds were followed by the dry sound of paper sliding across paper as they prepare to take notes anyway. The first and only noise to have come from Cadets since entering rest.

Rule 2: Treat Everyone with Dignity, Respect at all Times

The Cadets were told to act as good humans, to respect all individuals they come across during their time on base including Cadets, Cadre and civilians. “Do the things that are consistent with our army values,” Evans clarified. 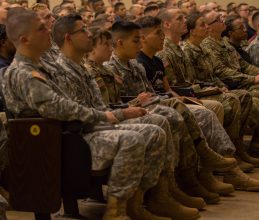 Rule 3: Remember the Four Attributes of a Good Leader

Evans used examples from pop culture and real life heroes to highlight each trait as he went over them. 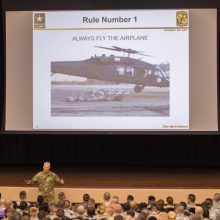 Always fly the plane is a metaphor for being able to push aside the negative and distracting parts in someones life in order to focus on the mission ahead.

“It means always work the problem ahead of you,” said Evans. “Don’t get distracted by those things on the peripheral. Solve the problem in front of you, so you can move to the next obstacle.”

To end his welcome Evans asked Cadets to consider donating blood if given the opportunity. A trauma victim can need 40 or more units of blood to survive.

“I can remember being in Iraq and Afghanistan,” he closed. “One of my pilots needed 52 units of blood one night.”

No Such Thing as a Fear of Heights