Through the rain showers, heat and all other obstacles, Cadets from 2ndRegiment, Advanced Camp are learning to “love the suck” as they go through squad battle drills, in the words of Cadet Andrew Fisher.

Fisher, from George Washington University, explained that because of the preparations for FTX through the squad battle drill, he and his fellow Cadets are learning how the role of a squad fits into the larger picture of a platoon. He emphasized how important squads were in the entire mission of the platoon.

Maj. Brent Anderson, Platoon Tactical Officer for 4thPlatoon, Delta Company, 3rdRegiment further explained that the battle drills are designed to get every Cadet on the same page with training. 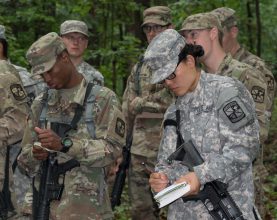 Cadets from 2nd Regiment, Advanced Camp prepared for the FTX by participating in Squad Battle Drills. Photo by: Steeley Shacklette

Because Cadets come from different universities, their training has been different until reaching Advanced Camp. The training that they receive here at Fort Knox helps even the playing field and get everyone to the same level of knowledge and skill before getting evaluated.

During the training for squad battle drills, Cadets learn six key battle drills. Anderson said, “Battle drill is practice, it’s just for every Soldier to know what to do and when.”

Fisher said that the hardest part of this was more of getting to know the people in your squad. He also added, “The more we continue to get to know each other, work with each other, and learn with each other, the squad battle drills are going to go more and more smoothly and we’re going to get more effective and lethal Soldiers at the end of it.” 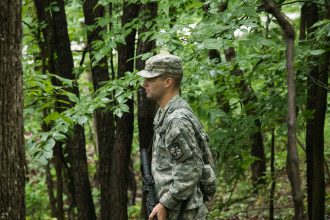 Cadets from 2nd Regiment, Advanced Camp prepared for the FTX by participating in Squad Battle Drills. Photo by: Steeley Shacklette

He also said that the Cadets have been pushed into taking initiative for their training. He explained, “The biggest thing the Cadre want to see is our initiative as future leaders, as future army officers. They’ve really given a lot of the power and direction on our own training and put it into our hands.”

“Whereas, we don’t receive much guidance in terms of ‘Hey, this is what you need to go do today,’ ‘This is what I want you to accomplish,’ or ‘I’m going to teach you this.’’

“It’s more ‘You’re about to go in the field for three FTXs, your success is dependent upon your own initiative and whether or not you want to take the time to work with your teammates.’”

Fisher emphasized that his squad’s positive attitude and actions where what was going to fuel him to keep going.