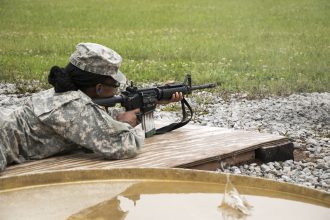 FORT KNOX, Ky. – Cadets from 4th Regiment, Advanced Camp tried their weapons at the pop-up course at the George Blair Qualification Range on June 26, having had the opportunity to qualify with still targets on the Alternate Qualification Course the day before.

Cadet Ben Anderson, a student at Texas A&M University, expressed that the pop-up course is more stressful than shooting at still targets.

“It’s a lot harder to locate and you feel really rushed,” described Anderson. 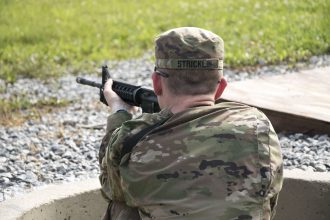 “[Y]ou have to move to hit each different target … without moving your rifle so you keep your same sight picture,” stated Craven.

Cadet Saul Henriquez, a student at the University of Puerto Rico, said he considers weapons qualification to be one of the most challenging events of CST.

“We don’t shoot that much back at our campus,” explained Henriquez. “But they teach us the fundamentals of marksmanship.”

Today he’s trying for an expert score at the pop-up course to qualify for the Recondo Badge, which recognizes Cadets for exemplary performance in several CST events. 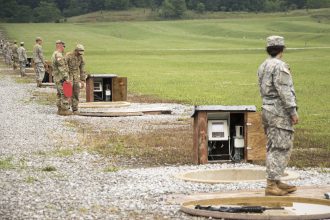 “I’ve met all of the criteria,” asserted Henriquez. “This is the event that will tell me if I qualify for Recondo.”

Cadet Jacob Paladino, a student at the Virginia Military Institute, stressed the importance of patience and taking the time to assess one’s surroundings when shooting.

“You have a narrow window to shoot,” stated Paladino. “You have to … always be conscious and ready to look down your sight.”

Experienced leaders are born from STX

Learning and Growing at FTX