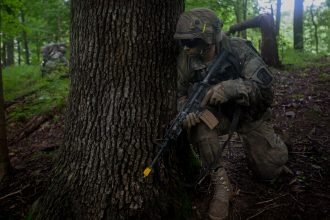 Cadets braced for battle. After a long night of securing camp and camouflaging themselves, they were ready for the opposition forces to attack at any time. The sky appeared to break open, a bright flash and boom filled the sky.

The Cadet’s exercise was put on hold. Inclement weather, heavy showers, lightning and thunder carried on for 40 minutes.

When the rain stopped the Cadets felt the familiar muggy air of the Kentucky forests, which offered a perfume of greenery and fresh water, a break from the sweaty smell familiar to the Cadets. 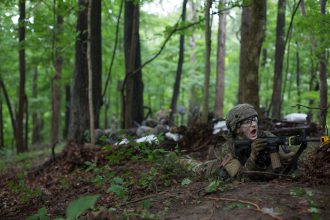 Their 18 day in the field and final field training exercise would be an event now executed in wet clothes and on soggy terrain. But, their spirits remained high. Cadet William Gischia, Michigan State University, said the rain hardly affected them anymore.

“We just have fun with it now,” he started. “Everyone was slipping and sliding around, telling jokes.”

The Cadets held their defensive base 19 hours, after taking it from oppositional forces at 3:00 pm June 25, before enemy soldiers arrived to reclaim the camp.

Immediately the sound of loud mortars and larger artillery seemed to fill the open space, creating a bubble of adrenaline that took over all the Cadets. 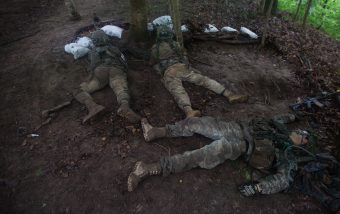 Communication on the friendly side seemed to be the only noise to break the deafening sound of the weaponry. As Cadets called out injuries, opposition sightings and calls to pullback from the front line.

After suffering four ‘deaths’ and three ‘injuries’ the Cadets where able to push the opposing forces out and achieve 360-degree security. Allowing them to focus on removing their ‘casualties’ using a medical evacuation and return to keeping their area secure.

Though the mission was a success the acting platoon sergeant, Cadet Leeanna Cmar from the University of Maine, wasn’t pleased with the time it took her to remove casualties.

“I knew where the [casualty collection point] was going to be and where the [helicopter landing zone] was,” she said, “but I didn’t think about how much man power we actually needed to take them up, so we had to take people of the line to come help us.” 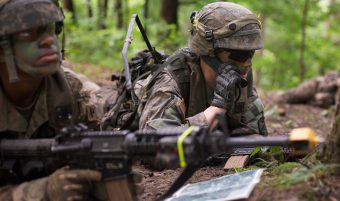 Casualty evacuation wasn’t the only issue Cadets faced outside of combat fire. According to Cadet William Bradley, Texas A&M, the radio-telephone operator for the squad, the group had issues maintaining radio communications which slowed down the platoon and mission.

The mission, though trying, was successful and provided Cadets with plenty of experiences to grow from. According to Gischia the field exercises has helped him grow in an interpersonal way.

“My attitude in general and coping in difficult situations has improved,” he explained. “Plus my ability to interact with people. This puts you in a new environment with so many from different backgrounds, and that’s what you are going to face in the Army.” 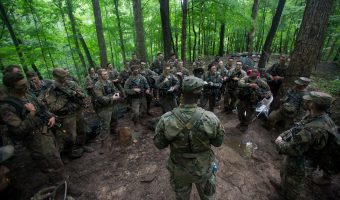 Cmar suggests incoming Cadets who will be facing the field training exercises, stay calm and trust themselves.

“Don’t stress about it, that’s going to make it worse,” she said. “Trust in your instincts and your leadership abilities. [You] have had three years to build yourself up for this and trust the people that you meet here. Trust and communication are two big things.”

She added that the experience was extremely awarding.

“The most rewarding part was seeing everyone so excited about [the mission],” she said. “Because we are in the second phase of our [field training exercise], everyone is ready to [leave]. It was really cool to see everybody’s spirits lifted.”