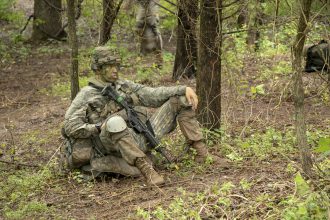 2nd Platoon, Bravo Company completed an attack on Objective Valhalla and then set up an area defense in preparation for a counterattack.

Cadet Matthew Pelletier, a student at Norwich University, described the mission as a success, crediting the platoon leader for getting the assault and support elements on line.

Pelletier served in the support element as an M240B machine gunner responsible for laying down a base of fire.

Once fire superiority was established, Pelletier explained, the PL called “lift fire” and the assault element assaulted through the objective.

He stated both elements effectively crossed the objective and hit their limits of advance with no casualties.

Cadet Kourtnee Sweat, a student at Virginia State University, noted their attack had a few hiccups in terms of coordination.

“Our actual attack element came too far into our support element,” explained Sweat. “I had to yell ‘shift and lift fire’ so they wouldn’t be shooting at our backs.”

Once the assault element re-oriented itself, Sweat continued, it was able to get on line with the support element and help carry out the mission smoothly.

Cadet Leighanna Bridwell, a student at Sam Houston State University, mentioned the Cadets have to deal with mental trials made to to show how they work under pressure that irritate and fluster them and get their emotions going.

“Your true nature comes out,” said Bridwell, emphasizing they learn a lot about themselves and each other through the stresses.

She and Sweat noted the rain takes an additional toll on the Cadets.

“It’s definitely been a rough time with the storm, the rain, the wet clothing,” stated Sweat. 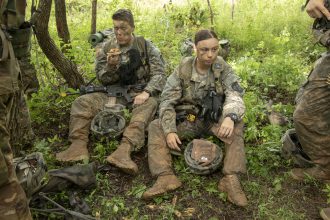 She asserted, however, the experience challenges Cadets to better themselves in leadership and make good decisions despite anything that might be going on around them.

During a pause, Cadet Ryan Walters, a student at James Madison University, sat on his ruck and took off his boots to re-wrap the bandages on his feet.

Despite the blisters and sores from walking in soaked boots, he said, he won’t look back on Advanced Camp as a totally negative experience.

“I’ll remember the moments with these 40 or so friends,” said Walters, cutting himself off to say “friends” instead of “Cadets”.

Zeroed In On Success