Fort Knox, Ky. – Cadets with 4th Regiment, Advanced Camp were challenged by the Field Leadership Reaction Course on June 26th. This event places a Cadet in a leadership position, where they must safely complete a given objective, while navigating an obstacle. They are dealt situations with many constraints and limited resources.

Cadets of 4th Regiment, Advanced Camp hunker down out of the rain and lightning at Alex Field Leader Reaction Course June 26 in Fort Knox. By Joseph Barkoff.

“It really tests our leadership skills and ability to work as a team,” said Cadet Catherine Lynch from Mount Mary University (host school McDaniels University), “Our goal isn’t to complete the obstacles, but show our growth and ability to work together as a cohesive unit, as leaders and followers. This is the criteria that we are graded on.”

The Cadets were delayed by the unpredictable thunderstorms this morning; but as soon as the threat of lighting subsided they took to the course and began their respective tasks.

Third Squad, 4th Platoon, Charlie Company, began on a destroyed bridge lane that gave them two boards and a rope. They were tasked to bridge the distance between two platforms with the given materials, transfer assorted equipment to the other side, and ensure that all Cadets made it to the other side in about 15 minutes. The squad worked well together and completed the obstacle with no penalties. 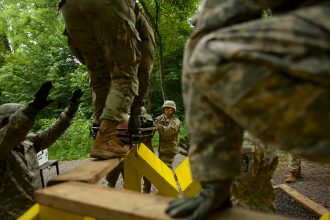 After coming off the obstacle, Cadet Jefferson Galvin from Texas A&M University Corps of Cadets told us what he learned, “Type A personalities need to realize that they need to understand how to let go and be a supportive follower for the person in leadership, who can help complete the leader’s initiative rather than fighting for control.”

2nd Lt. Michael Bryar, a graduate of Western Kentucky University, addressed the squad of Cadets. “Remember, the greatest assets you will have as new officers are your Non-Commissioned Officers, listen to them and they will help guide you in the right direction.” This is valuable advice for all these future leaders, whose NCO’s will have been doing their jobs for years and are experts in their field as well as leading their troops.

Later, 3rd Squad was faced with a more difficult lane and faced some hard decisions. After a few penalties and the loss of their squad leader, they realized the difficulty of the task and their worn out state. A new squad leader stepped up and decided to have the team slow down for the sake of safety. Eventually this choice caused them to sacrifice their success for the safety of the squad. 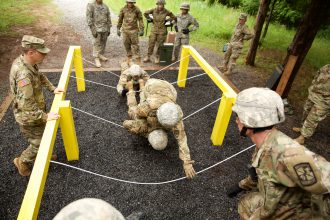 Cadet Whidney Desormo from the University of Tampa also reflected on her session with the course, “I really think the biggest lesson I’ve learned here is to be decisive. You need to find something that might work and see it through. If it doesn’t work, you can always find a work around and try again.”

Overall, the FLRC course challenged the Cadets to not only leverage their teams effectively to compete the objective, but also keep the team members well-being a top priority. 4th Regiment, Advanced Camp has exemplified the saying, “mission first, people always.”

Cadets Get Prepared for the Field with FieldCraft