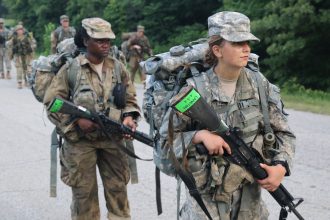 Cadets from 1st Regiment, Basic Camp conducted a 10K ruck march back to their barracks on June 28 at Fort Knox, Ky. (Photo by Emilia Kuentz)

FORT KNOX, Ky. – Cadets from 1st Regiment, Basic Camp, accompanied by deer and plenty of flying bugs, went on a 10K ruck march back to their barracks yesterday evening following several days in the field.

Beam explained walking with weight on one’s back is an important skill in the Army profession and also serves as a gut check.

Cadets from 1st Regiment, Basic Camp conducted a 10K ruck march back to their barracks on June 28 at Fort Knox, Ky. (Photo by Emilia Kuentz)

“You go on a long ruck – you just get tired, your body wears down,” described Beam. “But you’re doing it with the people next to you.”

He emphasized the awesome sense of relief and accomplishment a team feels upon reaching the finish line.

“It’s great for getting you in shape to be in the Army and it’s also great for building your team together,” added Beam. “You just have to get used to walking with weight on your back.”

During a break a few miles into the ruck, Cadet Sakia Leach, a student at Indiana University of Pennsylvania, tiredly announced her feet hurt and she can’t wait to take off her boots.

Despite her sore feet, Leach considers CST to be just as thorough mentally as physically. She’s met new people, tried new things, and been pushed to her limits.

Leach claimed “everything” has been her favorite part of Basic Camp, mentioning she gained confidence after going through an obstacle course having given it her all.

“It has furthered my knowledge,” expressed Leach. She added she’d proud to have accomplished things she’d never thought possible.