“As the Cadets graduate Advanced Camp, their next big test for them will be their Basic Officer Leadership Course, and it is paramount that they have some experience,” said Master Sgt. Patrick Saltsman from San Diego State University about the importance of the range.

Cadets from 5thRegiment, Advanced Camp battled high heat and humidity, showing their true officer potential, while taking on the Handiboe Zero and Alt-C qualification course at the range.

The time spent at the range prepares Cadets to go into the pop-up range, where they will have to qualify on shooting pop-up targets.

Cadet Patrick Thomas from the University of Delaware showed his drive to surpass expectations here at Advanced Camp. He explained his performance on the course by saying, “I did alright. Not up to my standards, but I passed and that’s what’s important for today. Hopefully I’ll have another chance to shoot again and improve. I’d like to get expert on the qualification course.” 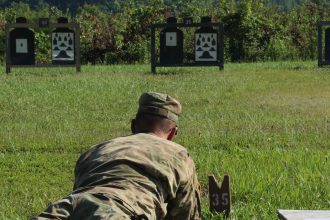 Cadets have a few challenges to overcome for Advanced Camp, especially at the Alt-C course. As mentioned previously, the Cadets are dealing with the heat and humidity that Kentucky summers bring, but they also have mental hurdles to clear.

Aiding in overcoming the mental hurdles, support psychologists are here to help the Cadets. Saltsman said, “They help Cadets focus on the task at hand—not allow fatigue, heat, or the fear of failure to get into their head.” At this point for 5thRegiment, Advanced Camp, fatigue is beginning to set in and they must be able to push through.

Cadet Wilhelmina Steinhof from Salve Regina University agrees that your mentality affects your shot accuracy. With future Cadets in mind, she remarked, “Don’t psych yourself out. Stay calm. Focus on your breathing and don’t psych yourself out because the minute you do—that’s when things go wrong.”

Zeroing in on Skills