FORT KNOX, Ky. – Cadets waiting to group and zero during their training are taught to minimize stress because shaky movements and jitters that impact the motion of a bullet in delicate ways. The tension from holding your breath for too long is enough to miss a target.

3rdRegiment Cadet Adrianne Del Castillo was a part of a large group of Basic Camp Cadets, a group of Cadets previously unfamiliar with the intricacies of firing a rifle. Del Castillo a student from Tarleton State University had only ever used a handgun and only handled her rifle at camp, never firing it. 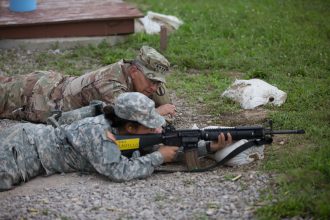 The moist southern heat weighed on her. The sun and humid air laid into the Morgan-Reiley range adding to the already stressful day.

Del Castillo approached the lane she would be shooting in, laid her rifle down and began to prepare to fire her rifle for the first time.  She would not only have to fire her rifle, but successfully group at least three of her rounds to move on to the qualification course.

The days prior 3rdRegiment Cadets focused their training on understanding the functional system of their rifles, along with how to properly carry and maintain them. 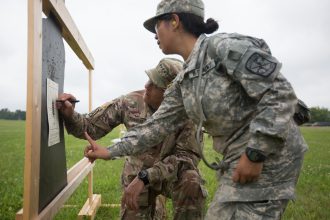 She began her exercise. The Cadets are given 30 live rounds and shoot five rounds at a time before checking and making any adjustments.

With 15 rounds in her target she was still struggling to group. She walked out onto the range with her trainer to check for further adjustments.

Unknown to her the Commanding General of U.S. Army Training and Doctrine Command, Gen. Stephen J. Townsend, was following her onto the range to see how well she was grouping.

Del Castillo’s face, first coated in confusion, quickly turned pale with anxiousness as she realized who decided to join her training. 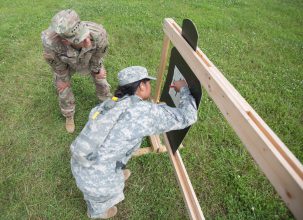 Townsend, marker in hand, crouched down to Del Castillo’s target and began locating entry points. Providing advice on how to understand her target sheet, recommending she draw a triangle connecting bullet holes and circling the holes as she goes.

On the way back from the target to her original position at the firing lane, the general and Del Castillo began small talk including why Del Castillo joined the service.

Del Castillo admitted to Townsend, she felt God called her to be a nurse in the military. Townsend, smiling, accepted her ‘calling’ and rebounded with his own experience.

“I married the daughter of a preacher,” he confided, “He was called by God. I believe God called me to be a Soldier.”

Townsend told the aspiring nurse that she was learning important skills that might be required to protect the injured.

“You’re learning to kill the enemies of America right now,” he started, “Could you do that to defend your patients if you had to?”“Yes, sir!” she responded quickly.

“If your hospital is under attack by the enemy?” he asked again.

“Good, you should be able to,” he concluded before lying down in the gravel to watch her shoot.

Del Castillo, now more nervous knowing she is being watched by the general, continued her training, still attempting to group. Her new trainer, more experienced than 3 average trainers combined, there to provide tips and guide her along the way.

Del Castillo fired her last round, her last attempt in the sequence to successfully group. She stood up and walked out to the target, joined by her trainer and Townsend.

They scanned over her paper, which now looked like inverted braille. Counting holes, Del Castillo and Townsend became confused. It appeared she lost progress toward grouping her rounds. She received a no-go, failing to group her rounds and was asked to repeat the course again.

Townsend was then asked when he would like to leave to take lunch. He responded saying he would leave after she received a go.

The two continued to work together after the confusion. Townsend thought the problem might have been user related, asking first to see in which direction she previously adjusted her rifle.

The sight appeared to have been adjusted correctly. The next issue, according to the general, was likely a breathing or stabilization issue.

The general asked if he could try shooting her rifle, she agreed. The general successfully grouped the target. Following his success Del Castillo hit the ground, with what appeared to be fire in her eye. 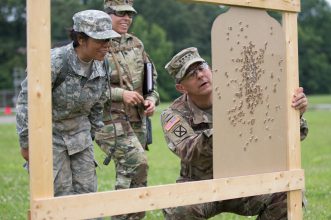 The Cadet walked out to the target once again. Leaning in next to the general to study her target. A smile filled her face as she and Townsend located a successful grouping.

Del Castillo appeared to have only positive things to say about the surprise training support, saying she fells more confident with her marksmanship skills.

Insight about the Training

The General, said the whole program is nothing like he remembered, referring to the Basic Camp (28-day program) and the Advance Camp (33-day program).

“This is far more intensive,” he started, “ and challenging than the summer camp I went to.”

Cadets come from all over and from different programs according to Townsend, which is why these camps, especially Advanced Camp, are so important.

“They come here and they have one common, bonding experience,” he said. “All the Cadets from all the universities.”

Townsend hopes Cadets leave with a strong understanding of the importance of teamwork and leading by example.

“Some of them are coming from ROTC programs that are very small,” he started. “They haven’t worked in large teams like the Army does, squads and platoons, before.

The General feels that the experience and training the Cadets are receiving is exceptional.

“The Advanced Camp, the training Cadets are getting here at Fort Knox today, is fantastic.”

Those interested in learning more about the Basicand Advanced Campscan learn more online at the Cadet Command.

I Swear, I See Them In The Trees