FORT KNOX, Ky.—Instructors rattled out instructions in a well-rehearsed, free verse poem. Nervous ears listened carefully, hoping to gain only a fraction of the Cadre’s confidence. Eyes strained in the light, looking at the top of the 64-foot rappel tower. On June 28, 5th Regiment, Advanced Camp Cadets rappelled. 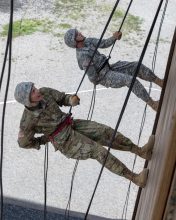 A Cadre member leaned out and introduced himself. Then, he leaned into the “deep-seated L” position over the edge of the tower. Three bounds, and three 4-point checks later, his feet touched the ground.

“Notice how they are extending their arm straight back, looking over their brake-hand shoulder,” the instructor said rhythmically.

The next demonstrator allowed himself to lose footing. 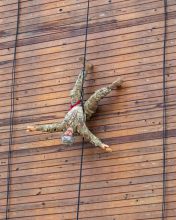 The final demonstrator flipped backward, feet in the air.

“Recover, Cadet!” the Lane NCO shouted. The demonstrator wiggled a bit, but for the sake of instruction, stayed inverted.

His belay, who had dropped to his knee, began to release the rope tension slowly. The demonstrator inched down the wall.

Cadre corralled Cadets under overhangs. They gathered gloves, a carabiner, and a rope which would form their Swiss Seat. Cadre made sure the Swiss Seat was uncomfortably tight. If it were not, the seat would not hold securely.

After being checked, and rechecked, they faced their first rappel—a leisurely inclined backward walk. The 64-foot tower dwarfed its tiny brothers. These small inclined towers gave Cadets confidence in their form, without fear of falling. 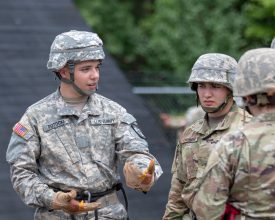 Cadet Potocki runs through the calls with another Cadet, June 28 at Fort Knox, Ky. (Photo by Angela Yin)

Cadet Kevin Potocki from Dickinson College waited in-queue to go down the incline.

“I’m excited; I think this [whole experience] is going to be a lot of fun,” Potocki expressed. “I’ve done a few things like this, but I’ve never rappelled.”

Cadet Matthew McCarthy from the University of New Hampshire rappelled before, but he admitted it had been a while.

“I’m a little afraid of heights,” McCarthy said. “But, I’m just going to have to jump into it.”

“You all are training to be future leaders in the Army. I promise the Army will find something that you are not comfortable doing,” the instructor chanted. “Jumping out of planes, rappelling out of helicopters, PowerPoint, whatever it is. They are going to find it and make you do it.”

Cadets filed into the check station, then up the tower. Another thorough check at the top, then to the Lane NCO to have their carabiner connected.

“If you are going to ask your subordinates to do something, you better be willing to do it, and be the first one out the door,” the instructor said.

Experience on the Tower 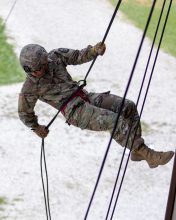 Advanced Camp is designed to bring Cadets to the same level before graduation. This is not everyone’s first time rappelling, and those experienced Cadets were there for their Regiment.

“I know some people are scared, like me, of heights,” explained Cadet Daquita Varner. Varner said she made sure they did their checks and helped them have confidence in their equipment and instructors.

“I think to myself, ‘I’ve done it once, then I can do it again,’” Varner shared. 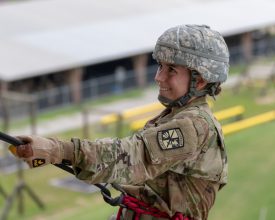 “It’s definitely scary at first, but you can do it,” Cadet Howard O’Brien from Furman University encouraged. “Trust your equipment, trust your peers, trust the people in charge of you–they care about you.”

Having that trust is essential and helps to ease the nerves.

Q. Is it ever as scary as it looks?

ACFT and the Power of Group Motivation