FORT KNOX Ky.- With minimal light, a map, and compass in hand, Cadets search far and wide in the thick brush of the woods for plotted points. There is no sunlight to guide Cadets and Cadre step aside to see how well they can complete their mission.

“What we have today is about 320 Cadets from the Alpha and Bravo Company, 3rd Regiment Basic Camp who are getting ready to go out and do their nighttime iteration of land navigation. They finished their daytime iteration earlier today. The vast majority of them were able to get out there in the woods and find their points, come back and eat their chow and now their fueled up and ready to get at it again tonight.” 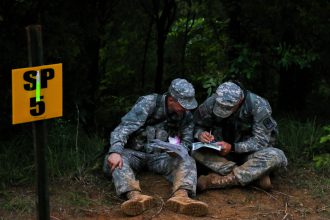 “Land navigation or map reading is important for an army member in general, so you know where you are and you know where you are going. What we found through many studies is that if you can look at a two-dimensional map, then pick your head up in a three-dimensional world and figure out how to how to get from point A to point B that proves you can solve pretty complex problems. One of the indicators of a successful leader is “can he or she do that?” the ones who can tend to go a little further than those who cannot.”

When asked what tools Cadets would have to complete the course, Coulter responded with,

“This course is great for confidence building. Like it’s going to get dark here real soon and they’re going to be out there in the woods and all they’ll have is their glow in the dark dial in the compass and a map lit by a red lens flashlight. If they can have the confidence to go out there from one point to another, and back, then that’s going to be huge for them. Then being able to solve problems and not panic when lost or come up with a plan to figure out where they are and where they’re going is great.”

“There is going to be a lot of trial and error. They did very well this morning, more than two-thirds of them were able to meet our standards for the day iteration and now they’re confident. The nighttime course is a little bit shorter, not as much movement for them, but they’re going to find their points. They don’t know it yet but they know more than they know at this point.”

From Cadet to Cadre.

2nd Lt. Koby Allen shares his experience from completing the course to helping Cadets do the same. 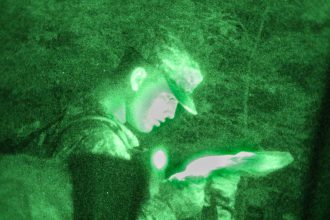 “Last year at Advanced Camp, it was fairly challenging. A lot of us got lost at a particular point, but we eventually found it. You can see that with the Cadets here today, they just learned land navigation so you can see that they’re still trying to get those basic skills down. When they got out into the woods they may not have been as confident as they needed to be. Though that’s the difference between basic and advanced camp. We were more experienced with land navigation and even though we did get lost we had more confidence that we could find our way back with tine.”

“The event is run by committee, so we try not to step on any toes when it comes to what telling the Cadets what to do. As Cadre, we mainly go around and make sure the Cadets are plotting the correct points, using their protractor correctly, verifying their pace counts, and making sure they’re confident once they step into the woods.”

Many have said it before, everything Cadets learn are basic skills needed to be effective Soldiers. It is a constant learning curve and with each mission completed, they are one step closer to greatness.