FORT KNOX, Ky. – Guests, military Officers and Soldiers gathered to recognize and celebrate the promotion of Maj. Gen. John R. Evans. The Commanding General of Cadet Command and Fort Knox was greeted by a packed, warmly lit room at the Saber and Quill July 3, 2018. 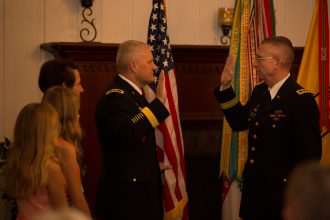 Evans commissioned as a Distinguished Military Graduate from Appalachian State University in 1988. He was assigned as an Attack Platoon Leader in an Aviation Battalion at Fort Bragg, North Carolina as a new lieutenant.

Martin and Evans first met in the Republic of Korea where Evans came to Martin as his Deputy Commanding General for Support. 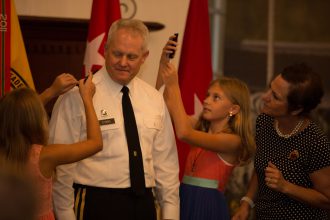 “I didn’t know John before that,” Martin said. “So, I quickly dived into his Officer Record Brief. ‘Who was this young Army aviator coming to the 2nd Infantry Division?’ Boy, was I surprised. What a phenomenal officer.”

At the ceremony Evans received his new two-star shoulder boards. These two stars represent his rank and everything he has given to the country. His family and Martin took the honor of attaching his new rank during the ceremony.

The flags originated in the 1880s, but weren’t authorized until 1903. Originally American generals used personal flags before the War Department designed flags for generals and admirals in the early 20th century. These flags are used today with each branch of the military having a different color; red for the Army, navy for the Navy, scarlet for the Marines, and ultra-marine blue for the Air Force.

Ruffles and flourishes, played by the band in the back, filled the air as the artillery salute rang in the room. Evans received the first round fired, saluting him as a major general, before the event ended. At the end, Evans asked the audience to sing ‘The Army Song’.