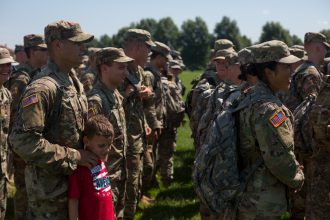 Cadets wait in formation before being reunite with friends and family on Family Day at Fort Knox July 4, 2018. Photo by Dustin Massengill.

FORT KNOX, Ky. – Families and friends packed into Waybur Theater on family day to learn about what the Cadets have been doing during Advanced Camp, at Fort Knox July 4, 2018.

Parents left the theater and waited in the sweltering parking lot near the parade field to wait for the Cadets to be bussed in.

Once the Cadets arrived they rushed from the buses to the parade field, some quickly grabbing hugs or waving at their families.

After getting into formation they began getting briefed on the rules of family day. Once released Cadets sprinted either toward family members or  quickly formed sign out lines. The Cadets were released to visit family from 12:00 pm till 9:00 pm. 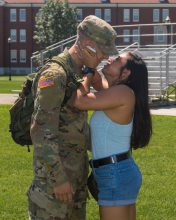 A cadet from 1st Regiment, Advanced Camp, and a young woman share a kiss during Family Day, July 4, 2018.Photo By: KirstyAnn Cole

This would be the first time the Cadets could see their friends and families in about a month. After a long period in the field and away from their families Cadets wanted, more than anything, a fresh hot meal.

“He asked if we could please get him something to eat,” said an excited mother waiting for her son. ”

Some had more than food on their minds as they were reunited with children or surprised by family all together.

Cadet Thomas Graham, Maranatha Baptist University, was surprised to see someone very special. His fiancee, in a new dress,-to stay undercover- took a break from her two day jobs to come visit him. Being twirled and spun after she was finally recognized.

Though the distance wasn’t great, some Cadets were used to the separation and used that as strength. Cadet Austin Llera, The Citadel, was excited to see his mother, father and girlfriend, but says the separation is similar to what he experiences in college.

“Going to The Citadel, a military school, we don’t get to leave a lot and freshman year you don’t get to use your phone a lot so it kinda acclimated me to this climate, not being able to use our phones for 20 days,” he said.