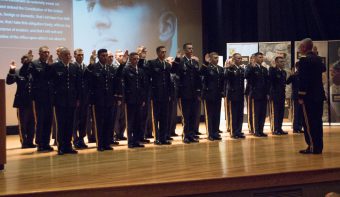 Families and friends gathered in the Waybur Theater to pin the gold bars on to their fresh-out-of-camp Cadets shoulders.

Cadets listened diligently while Martin expressed to them the importance of their role in the U.S Army and how he has the utmost confidence in their abilities.

“Have confidence. The foundation has been laid by your families, by your school, by the Reserve Officer Trade Core and by Cadet Command,” he continued. “You are ready, you will do a great job, and I have of the ultimate confidence in your capabilities.”

It was an emotional day for some newly commissioned Second Lieutenants. 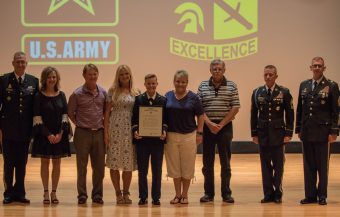 Surrounded by her family and her wife, 2nd Lt. Hannah Person, University of Southern Mississippi, offered some advice that she believes future army commissioning officers should hear.

“As a Second Lieutenant, you have to learn how to lead yourself and make the right decisions, before you can lead someone else,” she expressed. “So always do the right thing, even when it’s the hardest thing to do.”

Although most Cadets commission after finishing Advanced Camp and four years at their University, newly commissioned 2nd Lt. Hena Jenkins, Alabama A&M University, has been waiting to commission since 2010. 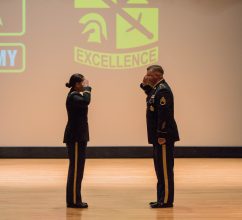 “Today was like a dream come true, it was bigger than my wedding day, I’m so excited right now,” she said with a smile on her face, “In 2011, I found out that I was going to have a baby… so I put that dream on hold for a while and stayed with him for three years.”

Jenkins touched on why it was so vital for her to be finished with Advanced Camp and finally commission as an Officer.

“I needed to come back and try again and commission,” she continued. “Never give up no matter what, even if you have everything thrown against you… any kind of obstacle, I promise you, if I can over come it, so can you.”