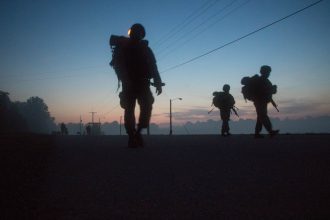 FORT KNOX, Ky. – Dozens of chemlight glow sticks bobbed in the darkness as Cadets from 2nd Regiment, Advanced Camp pushed through a 12-mile ruck with 35 pounds in their rucksacks on July 5, with staggered step-off times starting at 3:30AM.

The timed, 4-hour “forced” road march requires Cadets to exercise their physical fitness and mental strength, which is also needed to be able to quickly and efficiently move a unit from one place to another.

Cadets from Alpha Company, the second company to step-off, started rucking at 3:40AM, beginning their final must-pass event at Cadet Summer Training. 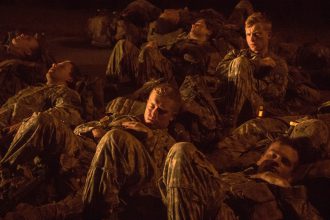 Cadets from 2nd Regiment, Advanced Camp rested, talked, and got some last-minute shut-eye before a 12-mile road march on July 5 at Fort Knox, Ky. (Photo by Emilia Kuentz)

About 20 minutes into ACo’s ruck, the occasional Cadet from the next company to step-off would appear from behind and run through a smattering of Cadets from the steadily dispersing herd a ways ahead.

Every so often, Cadets would take a moment to talk to the CST Public Affairs Office interns during the ruck. Pulling up beside the strangers carrying cameras instead of rifles, the Cadets offered small talk and jokes.

The camo-clad curiously asked questions before abruptly, but not impolitely, saying goodbye and lurching into the darkness ahead. 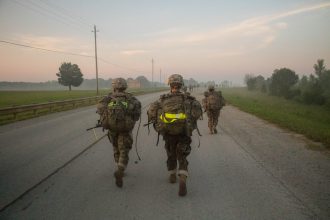 Having reached the turnaround point and nearing 7.5 miles, a couple of Cadets bounded down a slope, breathing hard.

“It’s those hills, man,” managed to escape in a rushed exhale by one of the bounders while Cadets streamed up the road in the opposite direction, still trudging along to the halfway mark.

Shadowy figures came out from around a bend, materializing out of the low fog that clung to the trees and hung over the rifle ranges on either side of the road.

As the hour hand crept past 6, the sky gradually turned a pale blue with a brush of faded pink as the threat or promise of sunrise approached. 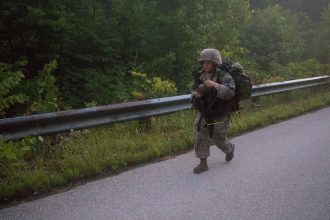 Cadet Gina Masciovecchio, Boston College, pushed on through the road march while her battle buddy gave her words of encouragement. (Photo by Emilia Kuentz)

Cadets Charlotte Plehn and Molly Murphy, students at Arizona State University and the University of Nebraska–Lincoln, began the ruck together and planned to finish it together.

As they walked side-by-side in the budding light, they shared a neon yellow-red-and-green, thick, sticky bar of sugar that had formed from a melted pack of sour skittles.

Plehn and Murphy giggled and playfully mocked each other, upbeat as ever, maintaining their pace and noting the comparatively short distance they had left.

“Rucking is so much better with a buddy,” one remarked to the other, receiving a nodded agreement and a decisive “Mhm.” 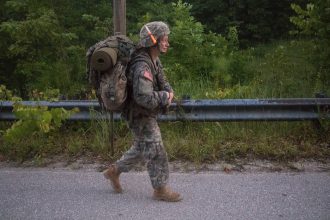 Cadet Amber Matchett, Eastern Illinois University, walked backwards to face her battle buddy and give her words of encouragement. (Photo by Emilia Kuentz)

A Cadet in her 10th mile moaned as she hoisted her ruck up higher on her back while the red sun sat just above the horizon, trying to blur and warp the sky as if angry at being ignored.

Another Cadet passed by wearing a pleasant and unconcerned expression as he sidestepped an ice pack oozing blue goo.

He sang a light-hearted, jovial song by himself, seemingly unfazed by the humidity, hills, and lack of a good night’s sleep – as if he’d started the ruck just a few seconds prior.

Learning and Growing at FTX