Fort Knox, Ky. – One month ago, the Cadets of 1st Regiment, Advanced Camp arrived at the Paul Disney Complex, ready to embark on a journey that would open the door to a bright and promising future. On the 5th of July, that journey met its fruitful end as the Cadets lined up in front of family and distinguished guests alike, graduating and ready to move on to the next stage of Army life. 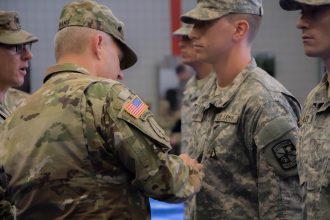 For the 31 days that the Cadets spent in Fort Knox, they did nothing but strive for success. They woke up every morning at the crack of dawn finding energy and resilience to push through the days’ tasks. Cadet Evan Shank found the strength and courage to go above and beyond and was rewarded for his actions with the sole RECONDO badge in the Regiment that was handed out by Maj. Gen. John Evans. The badge is given out to Cadets who receive a minimum score of 90% on all parts of Advanced Camp. However, every Cadet in the Regiment is able to look back on their time and grow from it. Their wells of experiences flow vastly deeper than when they first arrived and have set them up for future successes, no matter the endeavor.

For every success, there’s an ever-lasting memory. For every struggle, there’s a lesson to be learned. Every step taken has brought this group of Cadets one stride closer to their life long goals. There is nothing more one can ask for than to be given a fighting chance, the opportunity to seize a moment. 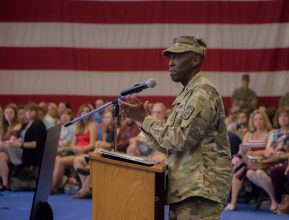 In the middle of the ceremony, Col. Farrell Duncombe looked to the crowd of Cadets and emphasized how this is, “their moment.” He talked about how this is the start of their young military careers, how from this moment on they are forever connected to a long lineage of brave men and women, and how in this moment moving forward they would be taken to new heights they may never had thought possible before.

“Every beginning has an end,” a phrase that everyone has heard thousands of times, yet never fully understand until one door closes and they look around for their next opportunity. At times the Cadets of 1st Regiment might have questioned if they’d make it to gradation, they might have wondered if they had made the right decision in coming here, or will they be prepared for what lies ahead of them. All the negative thoughts and self-doubt fall away as they hold their heads high and see the smiling faces of friends and family. There might not have been a talking duck or mouse in gloves, but these Cadets will cherish and remember the ups and downs of Fort Knox’s version of Disneyland.

Motivation is key in weapons qualification