FORT KNOX, Ky – With rivalry in the air and guns in their hands, Cadets from 2nd Regiment, Basic Camp, spent the morning of July 8, 2018 practicing and competing to be the top company in the Drill and Ceremony Competition. 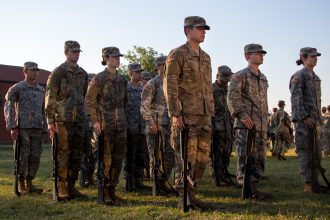 Alpha and Bravo Company from 2nd Regiment, Basic Camp practice in formation prior to the Drill and Ceremony Competition July 8, 2018.

Drill and Ceremony, also known as “D and C,”  is a practice within the military where soldiers march and follow various commands, such as “right face” or “right-shoulder arms.”

The squads must keep unity within their formation at all time, which requires a strong team and strict discipline. The companies practiced for two hours this morning, giving final critiques and words of encouragement to their teammates before heading to the competition.

A cohesive company is an essential part of drill and ceremony, making it a critical part of this competition.

“We want to see them work as a team,” explained Sgt. Stephanie Peterson. “This is a team building exercise…It drives that reinforcement of teamwork.” 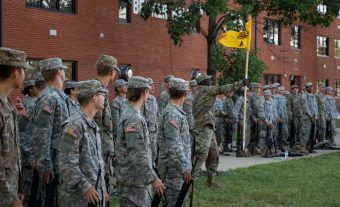 Cadets work together and motivate each other to better themselves and their team in order to achieve victory.

As her company rehearsed, Cadet Destiny Simmons-Harper, Virginia Tech, stood to the side with a notebook in hand, observing and taking notes of any improvements that need to be made by the squad leaders.

To keep that synergy, each Cadet is responsible for contributing their best effort towards the shared goal. Their squad depends on them to be prepared and keep to the strict conduct that is required.

“[A Cadet] might not be paying attention, exactly, and they’ll make a small error,” elaborated Cadet Matthew Kinslow, Washington State University. “Someone can notice it from afar, so you gotta really focus in on the command.”

Kinslow also described how he, personally, prepared by reading the handbooks and mentally rehearsing various commands. 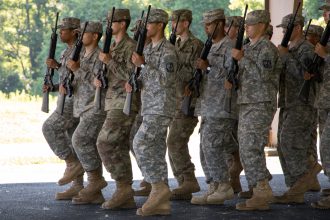 Today’s competition was a battle between Alpha and Bravo Companies, who have been duking it out over the past month.

Cadets were evaluated on how well they executed commands at the company, squad, and individual levels, as a pool of drill sergeants watched closely and allotted points for each command.

At the end of the competition, Alpha Company achieved their victory.

The Significance of Senegal for CULP Cadets

The start of a new Regiment, new Cadets are anxious