Fort Knox, Ky. – Buzz and excitement filled the air as the Honorable Mark T. Esper, paid a visit to Fort Knox on July 9th. The 23rd Secretary of the United States Army had a day filled with exploring all that goes into Cadet Summer Training, and took some time to engage with both Cadre and Cadets.

The Secretary’s first stop of the day was the Preliminary Marksmanship Instruction Pit, where he met with Maj. Gen. John Evans, Congressman Brett Guthrie, and Cadre as they discussed Cadet numbers and how to increase ROTC involvement. Once briefed on the facts and figures that go into making CST tic, it was time to get up-close and personal with some of the Cadets working their way through the PMI pit. Secretary Esper witnessed Cadets becoming familiar with their weapons as they became accustomed with the ins-and-outs of firing a weapon. After a quick introduction with some of the Cadets, it was time to move on to the next stage of training. 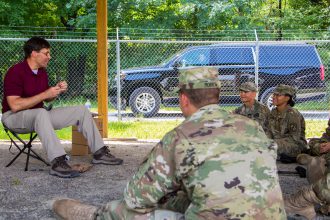 Secretary of the Army Dr. Mark Esper enjoying a MRE and some personal time with Cadets as they talk about everything from college life to their bright Army futures. Cadet Summer Training 2018 (Fort Knox, Ky. July 9) Photos by: Jakob Coombes

From the PMI pit, Secretary Esper and Guthrie trekked up the hill towards the daunting 64-foot rappel tower. There, they watched as Cadets maneuvered down the multiple sides of the tower and earned their passing marks. As they continued up the path, they were greeted to a VIP style lunch of MRE’s and a chance to chat with Cadets; covering everything from college life to summer training before moving along to the neighboring Confidence Course.

Although Secretary Esper did not tackle the Obstacle Course himself, he still managed to inspire Cadets with words of encouragement.

“You will soon become the elite 1% that protects the other 99%. You will be the leaders of this great nation and the future that drives us to forward successes.”

Secretary Esper continued to stress the importance of what lies ahead saying, “We need to continue to get the best and brightest in the Army, because one of you one day may be Chief of Staff of the Army way down the road, in 2060 or something like that.” 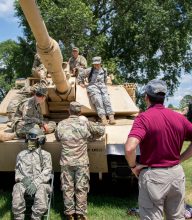 Cadets’ faces covered a wide array of emotions as they saw the Secretary walk around the obstacles. Some Cadets’ faces lit up with excitement and wonder as if they could not believe they had such a celebrity among them, in what originally was thought to be just another day of camp. Others looked as if they were about to meet their significant other’s parents for the first time, wide eyes and a look of nervousness on their faces. However, once given the chance to speak with him, everyone walked away with grins from ear to ear and a memory that will last a lifetime.

After spending time with Cadets at the Confidence Course, the Secretary was met with yet another quick transition as he made his way out to Waybur Theater for one of the most meaningful moments of his visit. Back in 1986, Secretary Esper took the Oath of Office to commission as a 2nd Lt., now he was given the opportunity to come full circle and commission nearly 50 young officers and welcome them to their Army careers. When asked what that moment meant to him, the Secretary reflected,

“It’s one of those important moments in your life. It’s like watching your child grow up or getting married, you just never forget something like that.”

The power of the moment is something that is hard to put into words. Every commissioning ceremony is special as it signifies promise and change. The Secretary could not be more right when saying this moment is one that will live in the hearts and minds of these officers and their families forever.

The Secretary of the U.S. Army passing down words of wisdom as Cadets soak in the unique experience. (Fort Knox, Ky. July 9.) Photos by: Angela Yin

As Secretary Espers’ time at Fort Knox came to a close, he made his way back to Godman Airfield. There he provided a few final thoughts about CST and the Army’s future leaders he saw training here at Ft. Knox.

“They impressed me with just how motivated they were in everything they did. They need to continue to train hard and remember to not only take care of their Soldiers, but also prepare them for all future endeavors.”

After providing those key takeaways for Cadets and future officers, the focus shifted to the future of the Army. The Secretary talked about how the future of combat is evolving to more, “high intensity warfare,” and when asked if he believed CST was properly preparing young Cadets to manage these future conflicts he responded,

“CST is on a very good path. It’s well balanced in the sense that it’s building competent and effective Soldiers, as well as challenging, which ultimately leads to growth.” 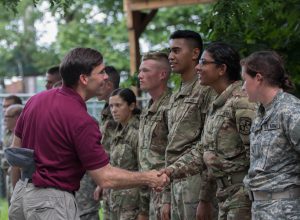 The Secretary of the U.S. Army Dr. Mark T. Esper engaging with Cadets after their run throughs on the Confidence Course. (Fort Knox, Ky July 9) Photos by: Angela Yin

Although it was only a quick visit to Fort Knox, the magnitude and impact that Secretary Esper had on these Cadets’ lives is impeccable. He made it obvious that even though he is a man of immense stature and importance, he is not some untouchable figure. He is a man of the people, both personable and precise; someone who cares deeply for the future of these Cadets and their bright futures, both in the Army and well beyond.