FORT KNOX, Ky. – In true career day style, Cadets from 2nd Regiment, Basic Camp explored their options within the Army and got a special visit from the Secretary of the Army Dr. Mark T. Esper during Branch Orientation July 9, 2018. 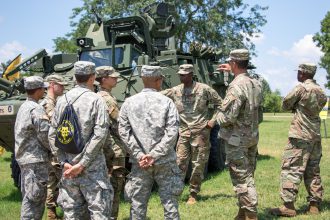 Tents and military vehicles lined the field of Keyes Park, as Cadets spoke with representatives from each branch of the Army.

“It gives them an opportunity to know what the Army has to offer, all components: National Guard, Reserves, any active component, and all the branches they would asses in the fall of their senior year,” said Lt. Col. Steven Kurczak. “This gives them their first look at what those branches have to offer.”

Often, Cadets come in with an idea of what they are interested in, and head straight for that tent. However, their Cadre encouraged them to visit other branches to see what else is out there before making their decision. 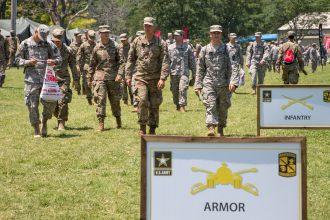 Cadets from 2nd Regiment, Basic Camp travel from tent to tent, learning more about each branch of the Army durning Branch Orientation July 9, 2018.

“I already had a set plan of my top three choices of what I want to branch when I got here, but today I was able to get a little more information,” explained Cadet Joshua Aulds, Old Dominion University. “I did some research before, but I’m glad that some of the Captains I talked to gave some really insightful information.”

Halfway through the day, Secretary Esper arrived with Maj. Gen. John R. Evans, Jr., the Commanding General of U.S. Army Cadet Command, and a hand full of high ranking officers. The officers gathered around the Secretary, discussing Basic Camp training and showing him what the Cadets were learning at Branch Orientation. 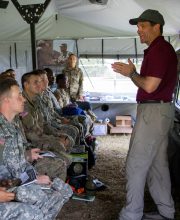 During his conversation with Basic Camp drill sergeants, Secretary Esper stressed the importance of quality of training of over quantity of Cadets.

“These folks will be leading soldiers in a year or two, or whatever timeline they’re on,” asserted Secretary Esper. “So, maintain quality first.”

He, then, visited the Army Reserve tent to speak to a crowd of Cadets about their training, share insights, and answer their questions.

Cadet Aulds was speechless at the Secretary’s wisdom and experience.

I Can’t Wait to Tell My Family