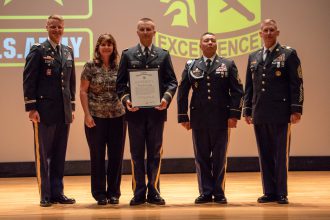 On a sunny and very hot Monday afternoon here at Fort Knox, inside the cool air of the Waybur theater, family members and friends of about to be commissioned Cadets chatted and milled around as they waited for the ceremony to begin

While most Cadets traditionally commission at their universities a day before they graduate, some Cadets for various reason such as injury, sickness, or emergencies, are unable to complete the Advanced Camp portion of Cadet Summer Training during the summer before their senior year. These Cadets return to Fort Knox the next summer and commission upon their successful completion of Advanced Camp.

Even though it is against the norm, newly commissioned 2nd Lt. Nathan Marks had this to say about the unique experience of commissioning at the end of camp, “I think it’s a little more special then just commissioning at your university. Here we did a lot of hard work as the final stepping stone for our commission.”

2nd Regiment’s Commissioning was made even more special as the Oath of Commissioned Officer’s was administered by the Secretary of the Army, The Honorable Mark T. Esper. 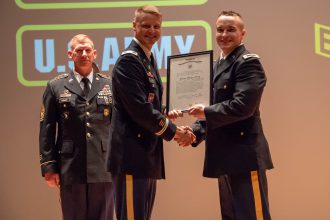 “I am confident you will do well. Make the most of this opportunity….It is your humble duty now to serve,” remarked Esper in his speech.

No matter the path a Cadet takes to receive their commission, it is the first stepping stone to their career as an Army Officer.

Rappel, Rappel Let Down Your Rope