FORT KNOX, Ky. – 2nd Regiment, Advanced Camp,  Cadets graduated from their training at Fort Knox, Kentucky July 10, 2018. Friends and family gathered around the steamy parade field at Fort Knox, sitting on shiny-hot  bleachers as they prepared to have their Cadets graduate. 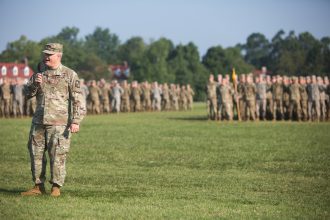 Before the ceremony began Maj. Gen. John R. Evans, Jr. gave a short speech congratulating the Cadets on successfully committing to and conquering the trials of Advance Camp. Then he gave thanks to the families for raising children that were inspired to serve.

The Cadets went through several rounds of attention and parade rest. Showing off their hard earned teamwork as a unit, flawlessly executing the ceremony. 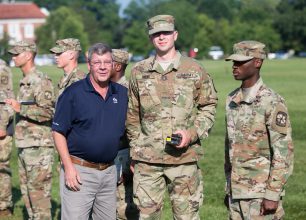 Cadet Sebastian Shenk, Penn State Harrisburg, received the USAA Warrior Spirit Award for demonstrating the Army Profession, Ethics and Officership while best exemplifying the warrior spirit. Shenk felt his parents inspired him to be a good person which helped him get his award.

“I was raised by great parents,” he started. “They taught me to be a good human being, be kind to others. I try to embody that coming into camp.”

Cadet Joshua Holt, State University New York, said his college career has all lead up to this graduation, adding to the value of the day.

“All these years work has finally come and I finally see the results and now the next step is commissioning,” he said.

Holt was joined by his military science professor Srg. 1st Class Kenneth Stanley, who said it was honorable and humbling to see the Cadets graduate after going through the same thing he went through as a young Soldier, but under worse conditions.

The first thing he asked Holt was, “What did you learn? Did you retain any of it, so you can give back to the school?”

The Cadets will return home or to follow-on training. Cadets interested in learning about the training required to graduate Advanced Camp can read more at Cadet Summer Training – About Advanced Camp.