FORT KNOX, Ky. –  Cadet participating in Field Training Exercises are expected to live, breath and eat in the outdoors. Their lives revolve around preparing for their missions, but when a mission consists of only minutes of heart-racing, blood boiling action the Cadets spend the majority of their time at temporary camps, ‘enjoying’ downtime. 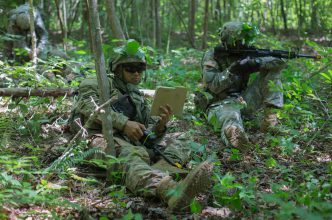 5th Regiment, Advanced Camp Cadets were 15 days into their FTX. Their first day of the Cadet led FTX experience. Prior to July 11 at Fort Knox, Kentucky, they had their ‘hands held’ as they learned the ropes and received specific orders from Cadre, freshly commissioned lieutenants and seasoned non-commissioned officers.

In the Cadet-led FTX, Cadets are given a mission but function autonomously. They are responsible for planning and execution. They must provide constant security detail while insuring each person is able to eat, sleep and maintain hygiene. 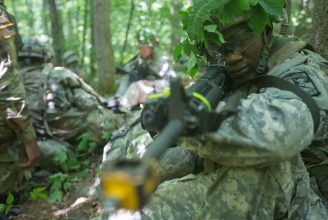 The majority of their time in the field consists of activities such as security detail. While on security detail, a Cadet must remain focused, training their eye and rifle on a small slice of the platoon’s perimeter to protect their camp. They can remain in a location like this for hours, but usually receive small breaks.

Even when sleeping the Cadets take turns taking watch, one sleeping at a time and the other two taking guard, staying in a triangle shape.

During security detail the biggest concern for Cadets is remaining awake. Lying still for a long period with a located gaze becomes mundane, but Cadet Amsull Ivan, Depauw University, says reminding himself about possible ambushes helps keep him awake.

“We can get hit at any time,” he started. “I think that gives me a little more of an incentive to stay awake.”

Cadets use this downtime between operations to tend to their bodily and social needs says Ivan.

“It’s utilizing downtime,” he started. “That’s our chance to recuperate. It’s hot so a lot of us are trying to refit and refuel ourselves. We are doing a lot of eating, a lot of weapon maintenance and mostly rehydrating.”

Cadet Daniel Monran, University of Dayton, recommends journaling and working on notes when trying to pass his free time and also just enjoying spending time with his platoon, getting to know his battle buddies better.

Moving, But Not Losing Sight