FORT KNOX, Ky – Cadets from 7th Regiment, Advanced Camp set their marks and took their best shots, as guests from the Kentucky State Cabinet visited and observed what goes on during Weapons Qualification on July 10, 2018. 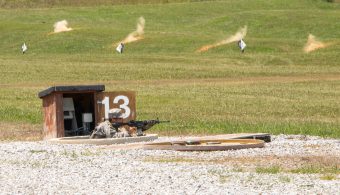 A Cadet from 7th Regiment, Advanced Camp aims at his target during Weapons Qualification July 10, 2018.

After practicing grouping and zeroing their shots the day before, Cadets were tested on their abilities at the George Blair “pop- up” range.

“Today, we are qualifying at the range to test our marksmanship skills,” stated Cadet Bryant Sullivan, East Carolina University. “The whole point of this is to ensure that your battle buddy next to you can do something as simple as cover your six. If they cant qualify, how can I trust them in the battlefield one day?”

Many of these Cadets, including Cadet Jackie Berry from Bowie State University, aimed to shoot an “expert” score of 36 out of 40, their goal being the Recondo badge. 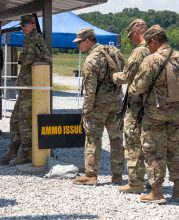 “Recondo just means that you meet the individual standards of 90 percent or above on each individual task,” explained Cadet Berry. “You have the land [navigation] exercise; you have the PT test; you have, of course, marksmanship shooting; you have the 12 mile ruck march.”

This event is not just a stepping stone towards high honor. Excellent marksmanship is essential for these Cadets, since they will soon be leading other soldiers on the battlefield.

“I think every soldier and, especially, every officer should know how to use these weapon systems,” Cadet Berry continued. “If we expect our enlisted soldiers, the ones who are following us, to understand and use these weapons, we need to be experts at it as well”

For this reason, Cadets take weapons training extremely serious. They want to excel in their performance, showing off what they have learned and the skills they have developed. 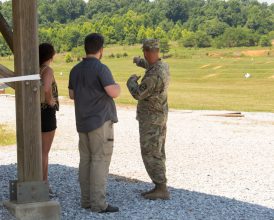 Cadet Mahlon Trout, Wilmington University, explained how he tries his best to stay calm and in a “smooth state of mind.”

While Cadets completed their qualification shooting, members of the Kentucky cabinet watched from above in the range’s tower.

“Whenever we have VIPs come through, it gives us inspiration and motivates us to do better,” revealed Cadet Sullivan.

Reunited and It Feels so Good