FORT KNOX, KY. – Darkness. Cadets of 6th Regiment, Basic Camp learned the meaning of the word as they completed the Night Land Navigation portion of their training July 11th at Fort Knox’s Grizzly field location. The goal was to test Cadets’ ability to adapt to unfavoring circumstances, as they attempted to find two of three marked locations deep in the Kentucky wilderness. 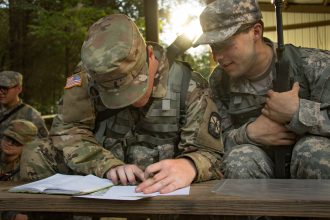 The ability to adapt is arguably the most important skill a Cadet learns during their time at Cadet Summer Training. Earlier in camp, the Cadets maneuvered the Grizzly training location when they tackled Land Navigation; aided by sunlight, the Cadets of 6th Regiment passed the exercise with flying colors. However, the question that had remained unanswered was how they would fair, in the dense woods, not being able to see more than a foot in front of them.

The calm and quite evening soon came alive as the sun receded behind the horizon. The natural inhabitants of the woods filled the air with repetitive buzzing and rumbling; pressure mounted as the Cadets rushed to plot their final points in the remaining moments of light. When finished, they proceeded to grab their weapons and gear before marching on into the dark abyss. From that moment on, they would have to depend on their battle buddies and adapt to the dark shroud that engulfed their surroundings.

Cadet Cole Ross from the University of Central Florida seemed to sum it up best, stating, “It’s the same course as the day Land Nav…just dark.”

The comment was met with laughter from his fellow Cadets and even some Cadre, before Cadet Ross continued, saying, “Once you find your bearings and get the hang of reading maps you can do it in any kind of environment.” 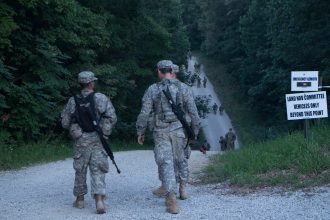 A task that was once thought to be intimidating and challenging, quickly turned into nothing more than a late-night stroll through the woods as the Cadets learned to adapt to any and all situations thrown their way. As the confidence they earn from each mission continues to build, so too does their knowledge of how succeed. It is evident that this group of Cadets are figuring out how to win the day and having some fun along the way.

“Enjoying success requires the ability to adapt. Only by being open to change will you have a true opportunity to get the most from your talent.”– Nolan Ryan