The training’s highlight is the Confidence Chamber, a room full of CS gas where Cadets personally experience the importance of their gear. However, it isn’t the only part of their CBRN training. Cadet Summer Training has brought two, out of only 60, M1135’s and a handful of chemical detection tools to show the Cadets.

The training can sparking interest in the chemical division, it is also important Cadets know about these tools in case they ever work with Soldiers involved with or using them, says Private David Velazco, Fort Hood, Texas who is part of the 48th Chemical Brigade.

“They don’t have to learn this,” he said, “but worst case scenario they know we have the instruments available to survive in them, to acknowledge whats there, confirm or deny and pretty much map out the entire contaminated environment.” 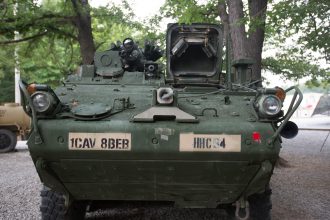 The M1135 Nuclear, Biological, Chemical Reconnaissance Vehicle (CBRNRV) is for detecting, and identifying chemical, biological and radiological hazards. The soldiers running it can warn other units of contamination and report the location of hazards. They can locate and mark clean bypass routes, while collecting samples to be analyzed later. 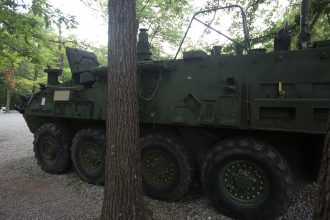 While it isn’t a combat vehicle it is capable of fighting back or ‘smoking and running’, which is releasing a smoke grenade and retreating at 60 mph. It is also capable of moving after losing six of its eight tires as long as it has one on each side. 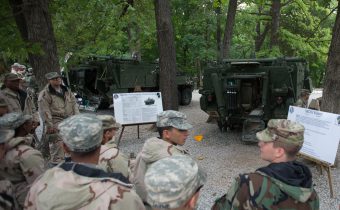 The surveyors station was the main work covered during the training on the M1135. To work in this position a Soldier must lay on their belly on the floor of the vehicle, attach a glove to a small port in the station while looking through a small colored viewing port.

Sliding their arm into the glove they are capable of safely interacting with the outside world from the inside of the vehicle. Once in position they are able to test the ground, take temperatures and collect samples to ensure the safely of other units. 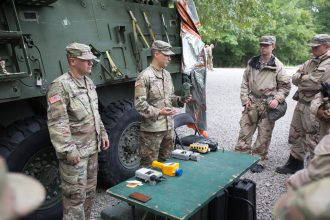 Joint Chemical Agent Detector(J-CAD)
This detector operates in two modes, area mode and point detection mode. It is capable of detecting sulfur in a substance and classifying it as a blister, nerve and blood agents.

M8 Paper
The small paper book lookssimilar to PH paper. The paper can be rubbed on any surface like a seat, rail or boot to detect an aggressive agent. If the paper changes colors an agent is present, yellow for German series nerve agent, red for blister agent and green for venomous series agent.

TruDefender
This device isn’t designed for a tactical environment due to its slow detection speed. This machine is capable of telling the user exactly what the substance in question is due to the thousands of agents stored in its database.

FirstDefender
The instrument uses an infrared laser to give a chemical breakdown of a substance. The Cadets were warned that the laser is capable of causing flames, warning them to be aware of their environment. This system is capable of identifying a substance by name and provides tips on how to deal with it.

Pfc. Brandon Elledge, Fort Hood, Texas, gave the example of mosquito repellent. If the FirstDefender gave a reading identifying a fire started by mosquito repellent then the device would indicate suffocation is the best fire suppressant. It also provides a list of viable methods for fire suppression, in this case, Elledge specifically recommended the seventh item on the list – dirt. A readily available resource in the field.

Multirae Pro
This is a gas meter with five different sensors, oxygen levels, lower explosive limit, chlorine, carbon monoxide and VOC(volatile organic compound). This decide can show the user how much of one of a substance is present and the flammable range.

Spc. Phillip Brown, Fort Hood, Texas explained how the oxygen sensor was especially important. “If the oxygen level is going up and down, that means their is a potential presence for another vapor in the air that is lowering and raising the concentration of oxygen,” he said.

identiFINDER
This device detects gamma and neutron radiation and helps to find it. The device can detect radiation from 600 meters (a third-of-a-mile). A team can then be dispatched to enclose the source in lead and wait for it to self-neutralize. 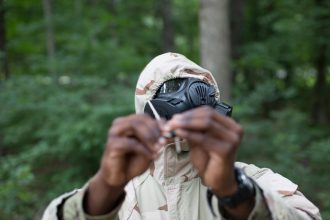 Elledge explained that neutron radiation is all around us. “When you first turn on this machine it is going to give you a reading of the neutron radiation in your area, here it is about 3.5 rems which is a very low dose. If we were to jump to about 10 rems this would sound off an alarm.”

This training is especially helpful for Cadets interested in branching chemical. Cadet Hunter Peoples, Marion Military Institute, says he has always been interested in chemistry and enjoyed this training.

“I have always been interested in chemicals and my sister, her major is bio-chemistry.” he said. “It is just something I’ve always wanted to do. We were going over all the branches and chemical kinda caught my eye.”