FORT KNOX, Ky – As their time at Fort Knox draws to a close, Cadets from 3rd Regiment, Basic Camp seized their chance to participate in the Spartan Race on July 14, 2018. 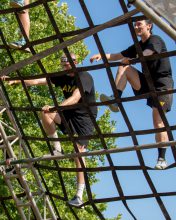 “I’ve never done this and I’ve always wanted to do it,” said Cadet Christina Taylor, Austin Peay State University. “I’ve never had the opportunity. I usually do half marathons and full marathons. I’ve never done a Spartan Race.”

With several heats taking off throughout the morning, the event brought in hundreds of runners and spectators from the public, including Fort Knox. The 4.5 mile “sprint” consisted of over 20 obstacles in and around the forests of Fort Knox.

“We did a lot of climbing, a lot of running, and a lot of hanging from obstacles,” described Cadet Taylor.

With all the physical training the Cadets have done throughout their camp experience, they were ready for the challenge.

The Cadets battled through the rough terrain and heat together, making use of the team development and comradery they have built over the last couple weeks. 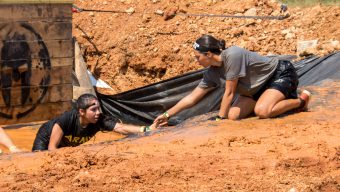 “We’ve spent the last month together doing a lot more boring stuff than this,” explained Cadet Jacob Voss, Marquette University. “We thought it would be a good way to end Basic Camp.”

The race presented new challenges and tested their capabilities. Each one met their match at one obstacle or another.

“The hardest part was probably the barbed wire cause you rolled for, what seemed like, a mile,” stated Cadet Nick Mohr, Purdue University.

Not only were the Cadets motivated by each other, they were inspired by the courage of the Operation Enduring Warrior group that was there participating and supporting the event. 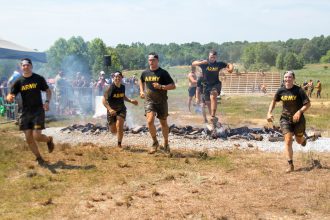 “They were definitely an inspiration,” explained Cadet Mohr. “How they do it for the ones who have fallen and can’t do it is really inspirational to those of us who are on our route to serving for our country.”

Once the Cadets made it and hurtled over the flaming logs, their faces lit up with joy and pride in what they had accomplished together.

“It was fun and I’m glad I did it,” concluded Cadet Taylor.

After finishing early, Cadet Taylor had the pleasure of greeting her team at the finish line and presenting them with their medals.