FORT KNOX, Ky. – Physical strength, mental perseverance, and unbreakable will were the name of the game as the Cadets of 4th Regiment, Advanced Camp powered through the final graded event of Cadet Summer Training…the 12-mile Ruck March. 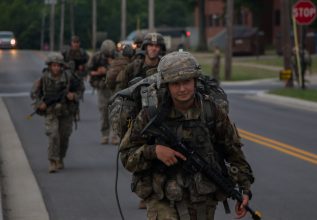 “Staying focused, staying strong, we had it in us all along!” Cadet Summer Training 2018 (Fort Knox, Ky. July 15) Photos by: Jakob Coombes

“The Odyssey” by Homer tells the story of Odysseus, a man faced with countless struggles and trials as he attempts to make his way back home following the events of the Trojan war. Throughout the story, Odysseus finds a way to persevere, regardless of the peril and uncertainty that stood in front of him. For the Cadets of 4th Regiment, Advanced Camp, their odyssey lacks the mythical gods and monsters, however it draws parallels to that same strength and mental-perseverance shown by the Greek hero of ancient lore.

Brothers in arms as these two Cadets close out the last mile of the 12 mile ruck march during Cadet Summer Training 2018 (Fort Knox, Ky. July 15) Photos by: Jakob Coombes

Earlier in the summer, each one of these Cadets backed up and left home. They set off to tackle a journey that promised challenge and change, and for a month, those promises proved to be true. They have succeeded in maneuvering through obstacle courses, field exercises, and marksmanship training alike and had finally come to face the final beast that stood in their way; the 12-mile Ruck March.

Waking up before the sun even had a chance to dream, the Cadets of 4th Regiment hit the starting line with rucks filled and anticipations high. The first group bolted out of the gates as the clock hit 3:30am. Into the darkness they raced, trying to find comfort in an environment that breed none. Cadet Spencer Allen of BYU gave this insight when asked about the challenge, “You’ll never wake up and love your job every single day, that’s just not how life works. However, when you find yourself facing hard times, you have to remember why you’re doing it. Remind yourself of the good times and double down on them. That’s what will get you through the struggle.”

The cool and calm morning air was soon filled with the sounds of hundreds of boots echoing through the course. Words of encouragement came from all directions as the Cadets cheered on one another as they attempted to make out the dark faces in the crowd. As the flat course quickly shifted to rolling hills and the weight of their gear seemed to double, they carried on through the night, feeding off of one another’s energy.

As the first round of Cadets reached their turn-around point, they were met with an eerie glow of the hundreds of green and yellow chemlights attached to their peers’ helmets and backs. They marched on, aided by the pleasant thoughts of every stride bringing them one step closer to the preverbal tip of the mountain top.

By this point, all sense of physical fitness left the body and many of the Cadets found themselves focusing on every one of the aches and pains. Survival mode kicked in as the Cadets continued to search for inner strength. As the sun began to creep over the horizon and illuminate the dark blue morning sky, Cadets’ faces perked up. This was it; the finish line was in sight. 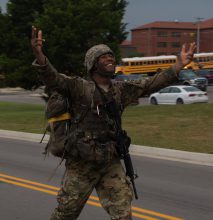 Aided by the mix of encouragement and heckling from Cadre members, the Cadets pulled every ounce of strength from their bodies as they sprinted to the tape. Finally, the culmination of their month-long journey was concluding. They had battled the beasts of Cadet Summer Training and could see their home on the horizon. Just as Odysseus stopped at nothing to make it back to his kingdom, so did the Cadets of 4th Regiment as they raised their fists to the air in triumph. Never again should there be any self-doubt in their minds. Today, they are able to etch their names into the lore of being a United States Army Soldier.

“I am Odysseus, son of Laertes, known before all men…my fame goes up to the heavens.”

Tears of Joy Despite Tear Gas