FORT KNOX, Ky. – Grab your Battle Buddy and join the Cadets of 7th Regiment, Basic Camp as they march into the Kentucky wilderness in search of at least 3 of 5 different checkpoints, as part of their Land Navigation exercise. The challenge of the mission stems from being strapped for time, with only having three hours allotted, and having to engage in precise map reading skills. The Cadets rely on one another as they count steps and keep their heads on a swivel, staying alert as they look for the distinguishable orange markers in the deep green foliage. 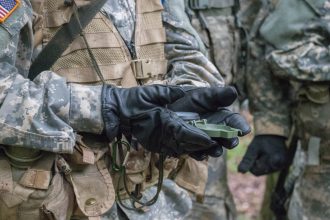 Following a safety briefing, Cadets are handed the necessary tools for conducting today’s mission. Once set, the clock begins to tick as the Cadets split up into their groups and race to plot their points. This vital opening stage will set the Cadets up for success, if they are able to make the proper reading and marks. After getting a feel for the road ahead, it’s now time to grab gear and begin the trek into the dense woods.

For many Cadets, the mission is a light and fun activity that allows them to work on skills that will soon become pivotal when tackling Advanced Camp. Even with the pressure of the task at hand, many of the Cadets like to keep the mood positive and personable. They laugh and continue to bond with member of their platoons; talking of life back home and shared college experiences. 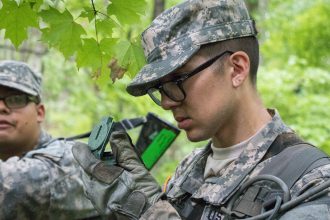 Cadet Michael Vieda from Florida Atlantic University looks back at his first week of camp saying, “It’s been great. They teach us all the proper customs and set us up for future success.”

With a big grin and a hearty chuckle, Cadet John Pepito out of The University of San Francisco chimes in with, “Yeah, it’s been great…I never knew there were so many ways to do push-ups.”

When asked what his biggest take away from camp has been so far, Pepito jokingly responded, “you’re always wrong and when you think you’re right…you’re still wrong. The only people who are right are the Drill Sergeants. Once you learn that, you’re golden.”

The two Battle Buddies’ moods turned on a dime, as they snapped into focus and got down to business. They checked their marks and assigned duties before taking those first steps into the woods. From there on, the pair proceeded to search for their needles in the giant Kentucky haystack. 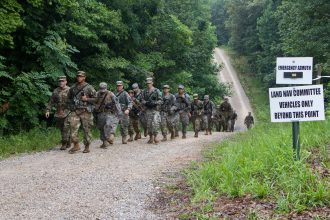 After no time at all, many of the Cadets completed the course with little to no issues. Their training had properly prepared them for the coming challenge and they proved adaptable to the unforgiving wilderness. They soon linked up with other groups of Cadets and Battle Buddies and began their march home.

The struggles and lessons learned today will help this young group of Cadets as they continue along their path to becoming Soldiers. Their confidence grows with the passing days and by the end of their month-long stay here at Fort Knox, they will be promising young leaders in the making.