FORT KNOX, Ky – It was a day of smiles and tears at the Waybur Theater, July 15, 2018, as 3rd Regiment, Basic Camp Cadets saw their loved ones for the first time in weeks. 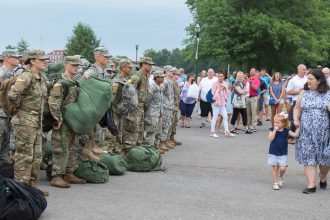 “I was ecstatic,” exclaimed Cadet Tandra Logiudice, Truman State University. “He’s like ‘ [you have] two minutes to get your bags’ and I was like ‘give me two seconds and I’ll run over there.’”

As the parents exited the theater after a short presentation, the Cadets march over to greet them in the parking lot. The Cadets lined up in formation, displaying the discipline they have learned, while families watched in awe of their composure.

Once the sergeant yelled “fall out,” Cadets made a bee-line for their families who embraced them in bear hugs.

“As soon as we got out of formation, I was like ‘Logiudice family, where are you?’ I was the first one to say anything,” explained Cadet Logiudice. 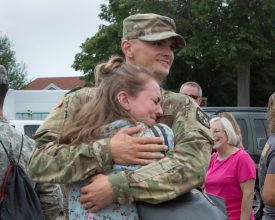 On Family Day, Cadets and their families get the opportunity to spend the evening together, doing whatever they want before they they Graduate the next day.

Many of the families were astounded by the Cadets’ slim figures from training, making food the first order of business and a restaurant their first destination.

“We’re gonna eat and feed him, put some calories in him,” said the family of Cadet Owen McMahon, University of Arizona.

Cadet Paola Flores-Velez, Kentucky State University, who’s family flew in from Puerto Rico for the special occasion, said she has been craving Puerto Rican food, while Cadet McMahon asserted that he’s ready for anything that’s not the Dining Facility. 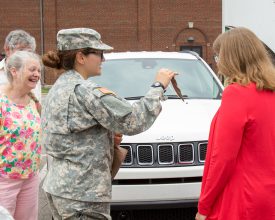 While families left to get their evening started, Cadet Logiudice gave her parents and grandparents a preview of the MREs, “meals ready to eat,” they are issued during camp.

“Is that like those Ramen noodles or something,” asked her grandmother.

At the end of the day, it’s not the food or the weightloss  at the forefront of family and friends’ minds. It’s the feeling of their Cadet taking the next step in their career and finally accomplishing their goal.

“We’re very proud of him,” expressed the family of Cadet McMahon.