A bullet from an M4 travels to its target at a rate of 2,970 ft/s. The impact of that bullet on the target is relative to the impact it has on a soldier’s career. Cadets from 8th Regiment, Advanced Camp improve and test their weapons training during Weapons Qualification at the George Blair Range July 16, 2018. 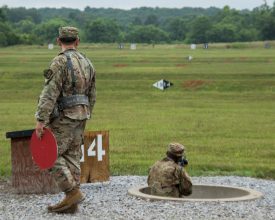 8th Regiment, Advanced Camp Cadet shoots out of a “fox hole” during Weapons Qualification at the George Blair Range July 16, 2018.

“They’ve already received their primary block of instruction, or PMI as we call it, which is classroom time,” stated Staff Sgt. Murray, the assistant to the Range Safety Officer. “…Then they come out here to apply those lessons learned.”

“They have three shooting iterations. The first one is a practice, or zero if you will, to kind of make sure the weapon is properly dialed into that person. Then the second iteration is actual, ‘okay, this actually for record.’ Then the third iteration, that was recently added, is to hopefully improve upon the block of instruction.”

The purpose of qualification is to ensure that the Cadets meet a certain standard that is expected of all Army officers. Thus, the expectations for passing are high. 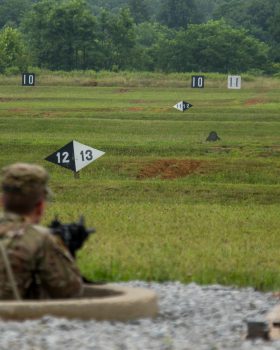 A Cadet from 8th Regiment, Advanced Camp shoots down a pop-up target during Weapons Qualification at the George Blair Range July 16, 2018.

After qualifying expert at Alt-C Qualifications the day prior, Cadet Pannu is trying to qualify as expert. However, he faces the challenge hitting pop-up targets at the George Blair Range, rather than the still, paper targets.

“This range right here is more similar to what we might be doing in combat, shooting silhouettes that resemble people,” said Cadet Pannu.

Marksmanship is an important step in the training of these future leaders of the Army. Each one must be equipped with the knowledge and skills it takes to operate their weapons.

“It gives them the confidence and the training technique that they are soon going to oversee, facilitate, etc.,” described Staff Sgt. Murray. “For their first few years as an officer, they will actually be leading elements on the ground, so that marksmanship training that they receive can basically be the difference between life and death for them and their Soldiers.”

When arriving for camp, Cadets come in at different skill levels. Many have never touched a gun in their life, while others have been shooting for years. This affects how they plan to overcome this new range.

Cadet Justine Hanway, from University of Virginia, had her first experience with a gun during the time at the range the day before. 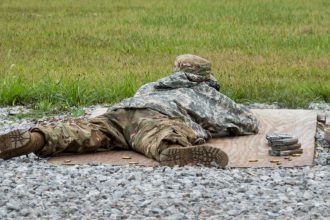 “Yesterday, I was having trouble because, on my first time trying to qualify, I couldn’t do it,” elaborated Cadet Hanway. “Then I talked to one of our sports psychology helpers, and he was saying that I need to focus on having a routine everytime I pull the trigger. So, just taking a breath and letting it out, then pulling the trigger and being consistent every single time. Then, I qualified right after that. Just focusing on that will help me do this one.”

For Cadet Nahgee Yeroozedek from University of Southern Mississippi, who has been shooting since he was five years old, his focus is on a new technique in using the M-4.

“I watched a few of them shoot and I was impressed,” added Staff Sgt. Murray. “For me to be impressed, they’re doing something right, to say the least.”

Though the task is tedious and the tension is high, Cadets find the joy in shooting and hitting their targets.

“Shooting can be fun,” continued Cadet Hanway. “You just have to take your time.”