ENTEBBE, Uganda– Thirty-three Cadets, a 1st Lt., a Capt., and a Sgt. land at the Entebbe airport after over twenty-four hours of travel. With weary legs they climb into a bus with a driver named Richard. Around 1 a.m. they arrive in Kampala, the capital of Uganda, without a single clue of the experiences they are in for.

KAMPALA, Uganda– The team visits the U.S. Embassy. They learn that the United States is in Uganda for two main reasons: regional stability and trafficking management. They learn about the roles of Foreign Area Officers and meet the Deputy Chief of Mission.

Outside of the Embassy, they take a tour of the capital to learn the history of the country. They learn about the many coups of the political power and tour the torture chambers of a particularly brutal leader, Idi Amin. They walk away with their hearts heavy.

Cadet Corey Spoon from the University of Cincinnati volunteered to simulate a suicide bomber in an EOD exercise teaching the UPDF how to safely remove a vest from a body.

JINJA, Uganda– The team meets Brigadier General Kinalwa of the Ugandan People’s Defense Force at the Jinja Junior Command and Staff College. Cadets compare the training program of the Ugandans to their programs back in the States. They absorb the words of Kinalwa, “[The] only way to be a good general is to be able to operate anywhere around the world.”

The team attends Justified Accord, an international command post exercise where East African nations as well as countries like the U.K., France, and the Netherlands, all come together to simulate reactions at the headquarters level. Cadets listened to advice from officers from all over the country, being able to ask questions to leaders most would never have the opportunity to even meet. Tanzanian Col. Nyingo advises, “Be curious. African culture can be expressed through different cultures.” The Cadets got a taste of this advice after visiting a dance troupe and realizing the importance of dance and art in Uganda.

Cadet Corey Spoon wore an empty suicide vest to simulate a suicide bomber in an Explosive Ordnance Disposal exercise, where a U.S. EOD team teaches the correlating UPDF team how to safely remove the threat without damaging the body. 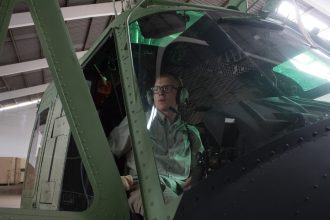 SOROTI, Uganda-– Cadets listen to the life story of LRA survivor David Ocitti. The Lord’s Resistance Army, or LRA, was started by Joseph Kony, who wanted to overthrow the Ugandan government and become “president.” Kony’s tactics were brutal: killing parents and kidnapping children to become soldiers. David, when approached by LRA soldiers when he was 17 years old, was asked who he loved most. He replied with his father. The soldiers killed the father on the spot. Then took David and his brother to become soldiers. David was able to escape after months under the influence of the LRA. He was 124 miles from home when he escaped. “Kony destroys everything valuable in your life,” David laments while explaining why more children do not attempt to escape.

Now, David assists other victims by reconnecting them with their families and finding ways to cope. He tells the people he helps, “Forget about the pains you were given. Think about what you take away from them.” Cadet Bear Hatfield from BYU- Idaho dwells on the subject adding, “It helped me realize that that really happened, and that people out there actually do really horrible things just to consolidate power. The other feeling I had was gratitude to be part of the United States Army, to have the opportunity to make a difference, to do something about these people, and really make a difference.”

Another opportunity the cadets had at Soroti was to visit the Ugandan People’s Defense Air Force and learn about Huey helicopters from a Ugandan pilot and U.S. Army Crew Chief. The pilot speaks infectiously about flying. “I love flying helicopters because I fly with my whole body,” Capt. Robert Rubengye says while motioning how one’s body moves with the pedals, cyclic, and collective. “Try out the unknown and see what opportunities are found there.” 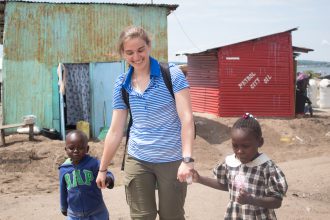 LAKE VICTORIA, Uganda-– Cadets take two tours across Lake Victoria, Uganda’s largest lake on its southern border. It is responsible for the country’s thriving fishing industry. The team visits Kimi Island, the smallest but most densely populated island in the lake. They meet nearly everyone on the island, including dozens of very curious and energetic children to grasp the everyday life of people in Uganda. They also visited Ngamba Island, a chimpanzee sanctuary to comprehend the severity of the bushmeat trade and how it is causing the chimpanzee population to dwindle.

QUEEN ELIZABETH NATIONAL PARK, Uganda– Queen Elizabeth National Park is the second biggest park in Uganda. The team visited this area of Western Uganda to understand the importance of animal conservation. The Cadets were able to see elephants, hippos, crocodiles, and other animals during their time there.

FORT KNOX, Kentucky– Cadets recover from the travel back to the States and notice the differences they feel: a newfound patience for slow internet connection and bad traffic jams, a craving for masala tea and sugar cane, an appreciation for toilets that you can sit on. The Uganda Cultural Understanding and Leadership Program mission was unlike any other. It was the first time Cadets were able to go to the country of Uganda through CU&LP. These 33 Cadets have experienced moments that will forever shape them as a leader. This statement I can guarantee, because I am one of the 33 Cadets.

In the words of Lt. Cmdr. Lewis of our U.S. Navy whom we met during Justified Accord, “You learn by just working in the same room as different people.”