These Cadets took their first step toward Cadet led field exercises. They spend the first few days in the field learning the basics and this exercise functioned as their first practice exam. 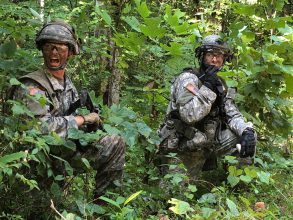 The Platoon Leader gives commands to other Cadets during the Situational Training Exercise at Fort Knox, Ky. July 17, 2018. Photo by Dustin Massengill.

To prepare, Cadets eat and live exclusively in the humid wilderness of Kentucky. They receive tips and clear orders from Cadre while quickly cycling through a range of roles and positions allowing each Cadet to learn the basics in the early stages.

This specific exercise was about performing an ambush. The Cadets camouflaged themselves in the wood line and prepared to neutralize the targets. Cadre double check with Cadets providing last minute pointers before the opposition forces began marching down the road.

Once the black figures made it into position the Cadets opened fire. For 30 seconds the forest was filled with a flood of noise followed by an assaulting level of communication. The Cadets were vocal with each other, wasting no time, as they set up a 360-degree security and teams began searching the oppositional forces’ simulated casualties for intel and gear. 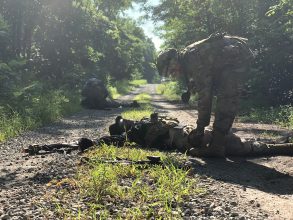 A Cadet searches the body of a simulated ‘casualty’ during the Situational Training Exercise at Fort Knox, Ky. July 17, 2018. Photo by Dustin Massengill.

The entire exercise was finished in under 5 minutes, from eliminating targets to securing intel and gear.

Sgt. 1st Class Donald Wyant, Auburn University at Montgomery, follows these Cadets through their entire training and works alongside them. He will be the one helping to grade Cadets once they move on to the more hands-off training exercises.

Wyant said that these Cadets did excellent and met all of his expectations.

“After talking to some of the Cadre, they said they did very well for their first iteration and I would agree.”

Cadets will quickly cycle though different roles allowing them to experience leadership from multiple angles.

Cadet Matthew Adair, John Brown University, was the Platoon Sergeant for the exercise. His role was to manage the ‘beans, bullets and Band-Aids’. 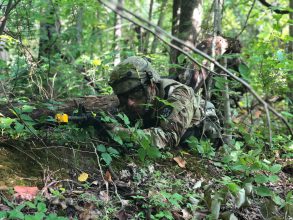 “I’m making sure that the logistics are all good,” he started, “that security is all good and basically that everyone is functioning the way that they need to be for the Platoon Leader’s mission to succeed.”

The mission is very dependent on people functioning autonomously, on their own, according to Adair.

“It’s a basic hierarchy of leadership,” he said. “It is supposed to be bottom up. You aren’t supposed to be telling people down below what they need to do. Everyone knew their jobs today and they did them and things went smoothly.”

This early field training exercise is also designed to help the unit tighten, something Wyant says the platoon has been excelling at since the very beginning.

“The level of teamwork in this platoon that I have seen and experienced has been outstanding,” said Wyant. “Even from day one when they were getting to know each other and it has been going uphill ever since then.”

Wyants only critical remarks were about Soldier discipline, better camouflage and making sure weapons are on safe after every mission.