Fort Knox, Ky.- Cadets from all across the country come to Fort Knox for Cadet Summer Training and are tested and pushed to their highest level of excellence. One test in particular 8th Regiment, Advanced Camp Cadets faced is the Confidence Chamber.

The purpose of the Confidence Chamber is to instill trust in their equipment and prepare them for all kinds of unfortunate events in the world. Master Sgt. Erica McCarter, the NCOIC for the Confidence Chamber, explained why Cadets master CBRN. She stated this a precautionary measure in the case Cadets find themselves in a CBRN environment. They will know how to act and respond not only for themselves but also for the Soldiers around them.

Before entering the chamber, Cadets take several classes where they are taught how to suite up in their protective gear, the importance of their gear, and how to properly seal and reseal their gas mask. Once that part of training is completed they are ready to enter the chamber. 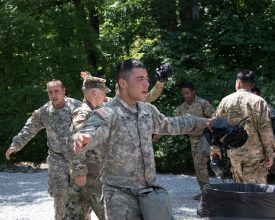 “The CS gas is not lethal, while exposed the Cadets are still able to sound off, state their name, where they’re from, sing a couple of songs, so on and so forth,”  McCarter stated. “It’s uncomfortable,” she continued, “It’s not easy or the most fun, however they are going to make it through.”

Side effects of exposure consist of watery eyes, mild burning sensation of the skin, and drainage from the nose. These effects tend to last no more than three minutes after exposure to fresh air.

8th Regiment, Advanced Camp came and conquered the event and are now equipped with another tool under their belt. Confidence is key and Cadets are happy to walk away with just that.

The Army Takes the Cake for 244 Years of Excellence